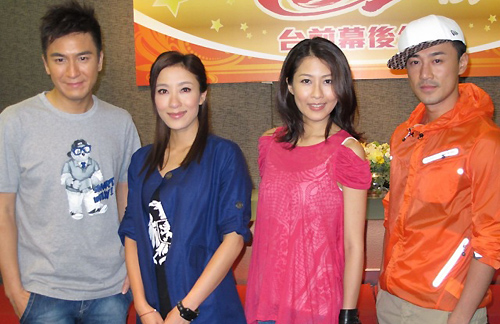 Three Kingdoms RPG <回到三國> is the third highest-rated this year to-date, averaging 30 points and peaking at 45 points during its broadcast in Hong Kong. Acknowledging the efforts of the cast and crew, TVB Executive Chairman, Norman Leung (梁乃鵬) organized a celebratory dinner on September 11.

Anchoring the drama, Kenneth Ma (馬國明), Raymond Lam (林峰), Tavia Yeung (楊怡), and Sharon Chan (陳敏之) enjoyed the fruits of their labor. With TVB announcing plans that the TVB Anniversary Award winners may be selected via live audience votes this year, Raymond and Kenneth were asked whether this may sway the votes in their favor.

Kenneth replied that he will face the awards competition without pressure. Asked whether he will work hard for awards, Kenneth said, “I am more hard working towards money!” Asked if he will issue a distress call as an election strategy for higher voter support, Kenneth said, “No, that’s disgusting!”

Arriving 45 minutes late to the celebratory dinner, Raymond Lam explained that he had to complete filming for a movie. Raymond said, “I filmed a water scene for the movie. When drawing the shower curtains, I poked my finger against the wall. It was so swollen and hurt so much I almost could not put on my pants. I my have to see an Orthopedics specialist.”

Asked if his confidence in the awards increased due to the live voting system, Raymond said, “My confidence did increase slightly. The company is good is attracting the attention of its audience. With higher audience numbers, the ratings figures will rise.”