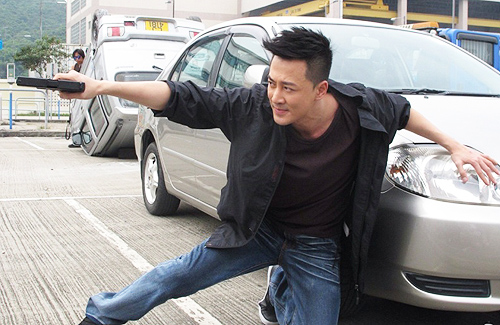 Raymond Lam (林峯) and Wayne Lai (黎耀祥) were in the studio on October 8 to film preview trailers for TVB’s 2014 Sales Presentation <無綫節目巡禮2014>.

Recently crowned TV King at the 2013 Huading Awards <華鼎獎>, Raymond was in a great mood though remained humble when asked to comment about his win. Despite his popularity and his newly-earned title, Raymond stated he has not considered raising his asking price. When asked if he would further his career elsewhere, Raymond replied, “Actually all of my outside projects were negotiated by TVB.” Asked if he is disappointed that he has yet to win TV King at his home station, Raymond emphasized, “No. Winning awards is just a bonus. What’s most important is to have a role that would attract viewers’ attention.”

Although excited about his award, Raymond did not forget his professional duties and returned immediately to Hong Kong overnight so he could film for TVB’s annual Sales Presentation. Despite having only a few hours of sleep, Raymond was alert and agile as he navigated through various explosive action sequences for upcoming series Apostle Walker <使徒行者>. A modern action drama, Raymond will play a policeman who will infiltrate the triads. Michael Miu (苗僑偉), Charmaine Sheh (佘詩曼), and Elena Kong (江美儀) are also scheduled to star.

Not new to big action scenes, Raymond always maintains his cool while shooting dangerous stunts. However, an earlier on-set injury caused Raymond to become more cautious at work. While filming the upcoming horror movie Baby Blues 3D <詭嬰3D>, Raymond was given a motorcycle helmet in the wrong size which aggravated an old neck injury. He suffered from a fear of bike helmets ever since. “I’m not afraid of fighting or jumping down buildings, but I am a bit concerned about wearing helmets. Luckily the crew gave me a retro helmet this time around. It is lighter and easier to remove.”

Wayne Lai was also seen filming for the Sales Presentation today. Although he lost the TV King title at the Huading Awards, Wayne feels that Raymond deserves the honor. “[Raymond and Fala (陳法拉)] are very influential in mainland nowadays. I did not put in as much time, so I am not as [popular].”

Wayne is scheduled to film comedy Water Hair and Rouge <水髮胭脂> with Joyce Koi (蓋鳴暉) and Katy Kung (龔嘉欣). Joyce plays a Cantonese opera actress who specializes in male roles. Off the stage, Joyce is a shy woman who does not know how to love and is afraid of being around men. She later becomes romantically involved with Wayne, though not before overcoming many psychological obstacles.

When asked if he is ready to tackle a comedy series, Wayne said, “Of course! I have imitated Roman Tam (羅文), and have played Zhu Bajie [in Journey to the West 西遊記]. Although when I was younger it was okay to act in an exaggerated way. Now that I am older, I must use a different style to express my character.”