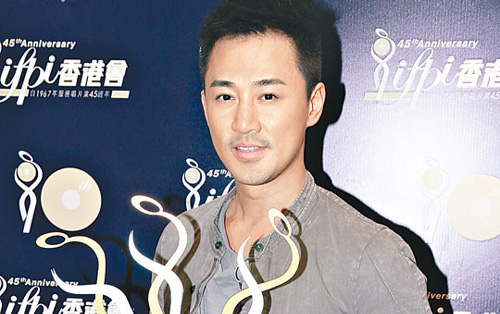 Due to the pain he was experiencing, Raymond was also absent from yesterday’s filming of TVB drama, Fight Crime <雷霆扫毒>. Raymond stated, “My back pain is due to excessive wear and tear of the spine during work. The doctor noted that the affected area is difficult to cure. During the Lunar New Year holiday, the pain was so excruciating I was unable to get up from bed, requiring my younger brother to support my arm. Now, I can only minimize attendance in promotional activities, take pain killers, and use acupuncture to help relieve the pain.”

Asked whether his present condition will affect his fertility, Raymond said, “I do not know, however, it was very difficult when recording a song earlier. I could not sit or stand for long periods. This affected the filming of Fight Crime and my dancing; I can no longer be chok. Fortunately, there are not too many action sequences in Fight Crime.”

“In March, I will be performing a concert in Australia concert. I will need to get an epidural steroid injection to control the pain.” Although Raymond’s parents were deeply worried about him, they did not force him to retire from the entertainment industry. Jayne: Raymond looks pale and in pain from the above photos. Sounds like a long suffering condition. Only true rest will make him feel better, not stronger pain killers.

181 comments to Raymond Lam Suffers Extreme Back Pain, Unable to Rise From Bed