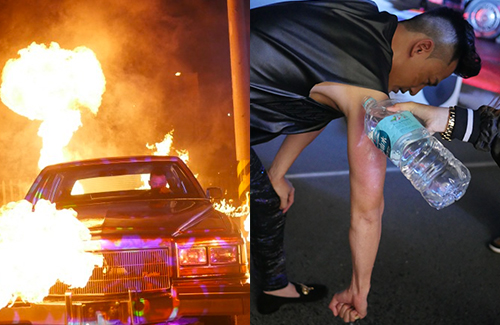 After leaving TVB in 2014, Raymond Lam (林峯) signed with his longtime record label EEG and officially became their managed artiste. Currently in full gear for his comeback, Raymond said he has never been this involved in his own album release before.

The 35-year-old’s last original studio album was in 2012, when he released his seventh album Self-Portrait. Now that he’s coming back from a three-year hiatus, Raymond has to make sure everything about the album is perfect so he can properly repay his fans for the long wait.

Raymond was deeply involved in every aspect of the album’s production process. He attended all meetings, discussed all possible concepts, selected music, and even contributed to the record’s marketing and promotion plans.

EEG is also giving Raymond their full support. In August, Raymond went to Seoul, South Korea to film the music video for his first single “Heart Attack,” directed by Korean MV and CF director Jang Jae-hyuk (張宰赫). To showcase the song’s strong beats, Director Jang added many visually-stimulating scenes in the video, including a scene with Raymond driving inside a studio room of fire. For everyone’s safety, a fire truck was parked at the venue in case of emergencies.

Despite the precautions, Raymond experienced a tiny mishap. While shooting a scene in front of a large fire, Raymond suddenly stopped singing and said, “Wah! So hot!” The director immediately stopped filming and noticed that Raymond’s upper arms had turned raw red. The film crew immediately applied cold water on Raymond’s burn. Director Jang asked Raymond if he needed to stop filming for a while, but Raymond said, “No need to. I’ll be fine!” Impressed with his professionalism, Director Jang gave Raymond a thumbs up.

Raymond then joked, “It feel like all the hairs on my arms have burnt off.”