Raymond Lam Will Only Kiss Kate Tsui in “Fight Crime” 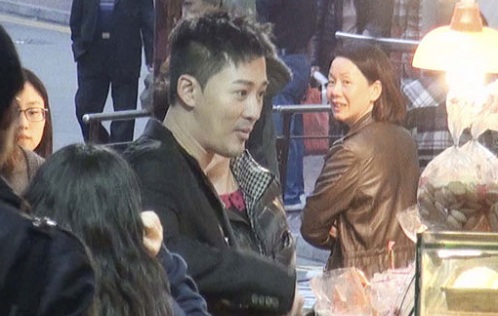 Raymond Lam (林峯), Kate Tsui (徐子珊), and Ella Koon (官恩娜) filmed in Sheung Wan for their new TVB drama, Fight Crime <雷霆掃毒>, yesterday. Raymond attracted a large crowd of fans requesting autographs and photos. A bakery proprietress smiled widely upon recognizing Raymond at her store. She offered to treat Raymond to free bread, but he refused, “No, business is still business.” Their disagreement over money went back and forth. Finally, Raymond succeeded in paying for his bread.

After completing their outdoor scene for Fight Crime, Ella and Kate boarded the TVB van to change into another set of costumes. Despite being criticized for his “undeserved” wins of Jade Solid Gold’s “Asia-Pacific Most Popular Male Singer Award” and the JSG “Golden Melody Gold Award” in January, Raymond was surrounded by a large group of fans. Raymond complied with their requests for photos and autographs in a friendly manner. It appeared that his popularity was not impacted his recent negative rumors.

Recording for the Jade Solid Gold program earlier, Ella was asked whether she was afraid that she will run into ex-flame, Ron Ng (吳卓羲), at TVB City. Ella immediately changed the topic, “Aside from work, I rarely pay attention to anything else.” (Will you greet Ron Ng?) “I will say hello to everyone I know upon seeing them.”

Despite sharing numerous scenes with Raymond Lam in Fight Crime,  Ella was unafraid of generating romantic rumors. Ella revealed, “In the drama, Raymond will only kiss Kate Tsui and not me!” (Is your boyfriend afraid of you encountering Ron Ng again?) “My actions are upright and I have nothing to be afraid of! My boyfriend will not ask me about my work.” Jayne: Raymond does attract a mob wherever he goes. As I suspected earlier, Raymond and Kate will have kissing scenes. Will he be kissing her while she is pregnant with another man’s baby? Presumably Michael Miu’s baby? I don’t think TVB has filmed any seduction scenes between a pregnant woman with a man who is not the father of her baby. Perhaps this may be the first time, in an attempt to generate some controversy for the series.