In 2017, Rebecca Zhu (朱晨麗) won Best Supporting Actress with her performance in TVB drama A General, A Scholar, A Eunuch<超時空男臣>. Portraying Matthew Ho’s (何廣沛) romantic interest in the series, the duo raised eyebrows with their undeniable chemistry, and it was speculated the pair took their on-screen romance off-screen. In a recent interview, Rebecca sparked fans’ excitement again by praising her rumored boyfriend nonstop. 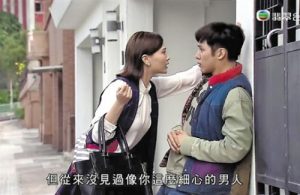 “He is a very good boy, very filial,” Rebecca expressed. “I think he brings me good luck because I have not stopped working after our first collaboration in A General, A Scholar, A Eunuch.”

She explained not only did she win an award for her work in the series but also she received dramas back to back – sometimes filming two dramas simultaneously. However, Matthew also gained endless opportunities since collaborating with Rebecca. Most recently, he landed the role of the male lead in The Dripping Sauce <大醬園>, in which he plays a married couple with Rebecca. “That means we bring each other good luck, which is very nice,” the actress said with a smile.

Rebecca added, “I think this guy has high plasticity. At first, I thought he could only play a eunuch well, but he became a different person in The Dripping Sauce.”

Before teaming up again for the second time, she heard good things about Matthew’s acting. Rebecca’s The Stunt <特技人> costar Shaun Tam (譚俊彥) told her, “Matthew Ho was the first time I saw a man enter a scene bawling.”

Rebecca expressed, “I was in disbelief because I didn’t get to see it, so I’m lucky to work with [Matthew] again in The Dripping Sauce. This time, we’re married with kids, so I can’t wait to see everyone’s reaction.”

As to whether they are a couple in real-life, Rebecca shared, “He knows I’m alone in Hong Kong, so we contact each other a lot in our private lives. I think I can consider [dating] Matthew because we’re both single.”

She continued, “I think if I were to choose a husband, I want someone who has filial piety. I think he is filial because the paparazzi always photograph him with his family or with me.”