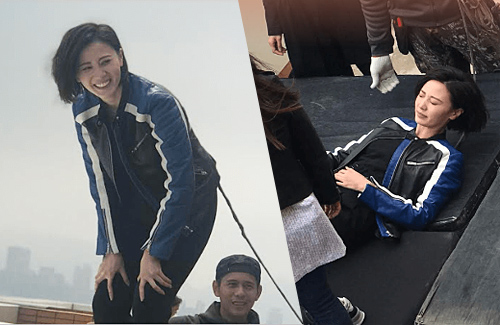 After winning Best Supporting Actress for her role in A General, A Scholar and A Eunuch <超時空男臣> in 2017, Rebecca Zhu (朱晨麗) has been heavily promoted by TVB. The 31-year-old actress is currently busy filming for Forensic Heroes 4 <法證先鋒4>. Although filming has not yet concluded for the series, Rebecca has already been cast in another upcoming drama, The Great Soy Factory <大醬園>. She will be co-starring with her rumored boyfriend and fellow colleague, Matthew Ho (何廣沛) in the Republican-era drama revolving around the business politics behind a soy sauce factory.

Fully aware of her fortune in having plenty of work, Rebecca has placed all her focus and efforts on her career. While filming a scene for Forensic Heroes 4 recently, Rebecca shared that she experienced sharp elbow pains. It turns out the actress had a dislocated shoulder! In hopes of preventing delays in filming, Rebecca worked through the pain and successfully completed filming a rooftop rescue scene. Unfortunately, this resulted in a subsequent injury to her calf, where she suffered bruising.

Once filming completed, Rebecca went to seek proper treatment and diagnosis from a medical professional. It turns out that her cervical vertebra is severely shifted. She expressed, “The doctor asked me if I had recently been in a car accident, and I told him no. The doctor curiously asked how I could have such a severe cervical shift if I hadn’t been in a car accident. He then performed acupuncture and humerus reduction. This injury was further aggravated from the action scenes I had to film. Though I visited the doctor once, I didn’t have time to go for my follow-up appointments. There is still an aching pain. Right now, I am also busy filming for The Great Soy Factory. Hopefully I will be able to squeeze out a day or two to go to my follow-ups appointments.”

The most recent of Rebecca’s action scenes in Forensic Heroes 4 talked about how she had to save a suicidal girl threatening to jump from the top of a 39-story building. Rebecca, who has always had a fear of heights, had to overcome her anxiety. “Actually, I was really scared! I had to stand and walk along the ledge from so high up to save someone. The wind was really strong too. I kept telling myself to focus and not to look below or around. Luckily, there were only a few outtakes. I am quite happy with how the scene turned out.”