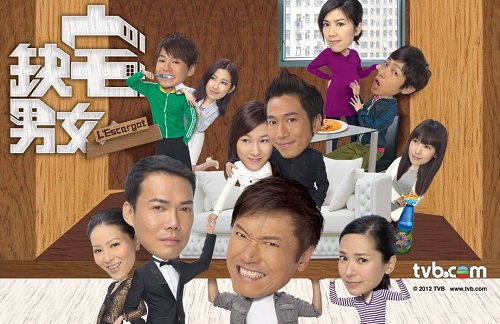 Brilliant writers, Lau Choi Wan and Suen Ho Ho, have written L’Escargot that centralizes around the Chinese dream of owning a home for their family.  It is fair to say it’s a dream regardless of any culture. For the Chinese, we know this dream is not just ours but a responsibility we have for our parents and our future family.  This is embedded in our cultural DNA.  This is our responsibility, not just a dream.  It’s a promise to prove our capabilities and in a way, this translates to love for our parents.  I believe most of us aren’t raised to say we love them or to hug them.  Many times, we translate this love into an unspoken responsibility.  We work hard, we provide living expenses and we provide a shelter.  We are taught; this is our honor as children.  And it is.

For the longest time, I couldn’t figure out why they named this drama L’Escargot which means “snail” in French.  Until the last episode, Ka On explained to his daughter, the snail represents the burden and responsibility of owning a home/family.  I loved the entire drama but something minor bothered me in the last episode.  After Ka On constructed his countryside cottage, these tough guys came and ruined the place and it is easily solved by Siu Lan (Mandy Wong).  I just thought that abrupt and violent scene was very unnecessary.

This drama beautifully balances the focus of owning a home and relationships and how trying to own a home is affecting the relationships.  It is an understandable obsession.  If I were a non-Chinese person watching this drama, there’s a great understanding as to why this dream is important, even if I don’t share the same views. I love the human struggle.  I love seeing the characters get hurt and hurt each other and their desperate fixes.  Their warped mindset makes sense, but it doesn’t.  Older brother, Kwan Ka Ho lives his life righteously, but he fails to see how being right all the time isn’t always the right thing to do for his family.  This creates a huge conflict with his wife, Lan and difficulties for his 7-year-old daughter.  His younger sister, Ka Lok, repays her debt to Ko Wang Chim with her body, his second younger brother, Ka Hong, lacks the societal characteristics of a man. His youngest brother has “Peter Pan Syndrome.”  Throw in Ko Wang Chim’s narcissistic controlling businessman, who can justify his wrong doings as logic, and you have a beautiful world of people that contrast each other in ways allowing us to understand our own internal conflicts.  What I’m trying to say is, they are simple, straightforward characters that represent a part of us.  It’s the pain that lets us linger onto memories and it’s the pain that pushes us forward.

Oscar Leung never fails to disappoint as an actor.  In this drama, he portrays someone who “wears the dress” in the relationship.  There are moments where he softly talks some sense into his rambunctious and annoying wife, played by Mandy Wong, who captured the essence of the spitfire Chinese wife archetype.

I can say that for the first time, Ron Ng’s character actually mattered in this drama.  It is truly comforting to see TVB invest in a drama that  focuses on human relationships and their flaws.  Even among good people, things can become disastrous, but they will come to an end.  I like how Linda Chung’s character is never emotionally available versus Ron’s character, who starts to accept Joyce as his new found lover.  No one is wrong here. Ron’s facial expressions won me over as a heartbroken and devastated boyfriend.  When he found out that his girlfriend cheated on him and when he walked passed Ka Lok; I think he’s improving as an actor.

I find Ko Wang Chim (Michael Tse) a very interesting character.  He brings up the ever-popular question, “Why do men cheat?”  As I’m sure his love for both his wife and Ka Lok are both genuine.  He wants an equal partner, his wife, as well as being an adequate provider and leader to someone demure like Ka Lok.  His wife represents his equal, his success, his earned love.  Ka Lok, his mistress represents an escaped memory he used to live when he was poor, a sense of innocence, and it seems as if he subconsciously longs for emotional pain.  For him, there is an urge for disruption when you feel perfect.  He wants something he can’t have.  He feels her hesitation is genuine love.  When was the last time we ever longed for someone we knew we should not be involved with?  But there lies the confusion; who has the right to impose rules on relationships?  To be human is to be permanently conditional.  And this is why Ka Lok exists.  There needs to be a balance between all the conflicting thoughts and personalities among us.  We need to figure out who we are. We need to make decisions to provide security for others and for ourselves and even when we fall, we need a home to make things right again.

P.S. Is it just me, or does everybody get a little sad when a drama ends? This review was written by Yina Z., a Contributing Writer at JayneStars.com. Visit Yina’s blog!