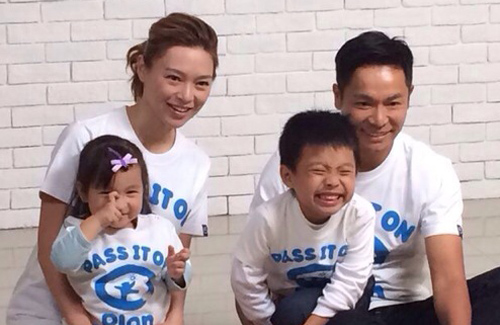 Although his career has reached yet another peak, Roger is surprisingly low key and mellow about his third Best Actor win. He cut down jobs to spend more time with his family and wife, Cindy Au (歐倩怡). The acclaimed actor actually enjoys spending time at home, opting to do house chores rather than going out.

“Unless it’s for work, Roger would almost always stay at home,” said Cindy. “Sometimes he would also take me to gatherings with the drama crew.”

Roger’s mellow personality is a perfect match for Cindy’s more outgoing one, and it does not come to a surprise at all to know that the couple have been together for over 14 years. Cindy said, “Roger is a rather romantic person. He likes to have flowers in the house, decorate the rooms, and would even sew back the buttons on my shirts if they popped out! He’s really good at it!” In contrast to Roger’s more delicate personality, Cindy called herself a tomboy – outgoing and rough. She enjoys staying outdoors and likes to take numerous classes for further enrichment.

Though Cindy insisted that Roger is a romantic, Roger said he is not good at giving gifts, especially flowers. He explained, “We have plenty of flowers at home, but I rarely give flowers as gifts. Cindy is a practical person.” Even so, Cindy said Roger would still surprise her occasionally with gifts when she least expects it, sharing that her husband once hid her gift under the blanket of their bed.

“I’m not romantic,” Cindy laughed. “The most romantic thing I did is cooking a meal for him.”

What touched Cindy the most about Roger is not his surprises, but his thoughtfulness and love for his family. She shared one unforgettable incident, “My parents always lived in a rented apartment. Because my mother was a medical professional, I grew up in Mong Kok. When they retired, they continued to rent apartments. Roger always took care of their rent after we got married. Since they’re getting older, it’s stressful to see them moving all the time. That’s why Roger decided to buy a flat [at $1 million HKD] for them. He handled the purchase, renovations, and furnishings. He also knew that my mother wanted to help take care of my niece, so he bought an apartment close to where my sister lived.”

Roger took Cindy’s parents to their new home after eating brunch one day, surprising the in-laws. Cindy said her parents were so happy their faces turned red. “It was so touching. It’s so hard to find someone like that!”

Roger is family-oriented, and no matter how busy his schedule is, he would always find time to take his wife, children, and in-laws on a big trip once a year. “This is something that we all find important,” said Roger. “We usually go somewhere with sunny beaches, just anywhere where we can truly relax.”

42 comments to Roger Kwok is the Ideal Family Man