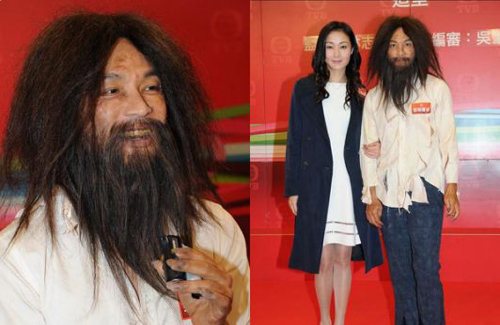 Roger plays an unfortunate character that was abducted in Vietnam and kept in a dark cave for over a decade. During his time in the cave, Roger lacked societal interaction and modern conveniences. He learned to survive using only limited resources and relied solely on his determination to escape.  During his capture, Roger’s hair and beard grew to resemble a caveman.

To convincingly portray a captive, Roger purposely lost over 20 pounds before filming started. During the costume fitting, many noticed his frailer physique – especially after he put on shredded clothes and his caveman beard.

Roger’s significant weight loss was not unnoticed by his son. Asked how he was able to shed so much weight, Roger said it was through vigorous exercise. “I continued to eat big breakfasts, but I will only eat vegetables for dinner.”

In March, Roger will go to Vietnam to film on location. Although Roger will have many girlfriends in the series, he is uncertain whether he will have any intimate scenes.

Set to begin principal photography soon, the series also stars Kenny Wong (黃德斌) and Vincent Wong (王浩信). Although Vincent was also abducted in Vietnam, Vincent left behind Roger for his own escape. Filled with guilt and post-trauma for the next ten years, Vincent became consumed with extreme sports such as rock climbing and parachute jumping to overcome his fear.