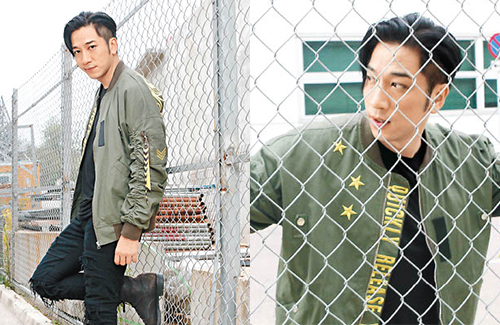 Though Ron Ng’s (吳卓羲) debut television drama appearance was in the 2001 sitcom Virtues of Harmony <皆大歡喜>, his first experience in the entertainment industry was in 1998, when he auditioned to be part of TVB’s dance crew. 20 years later, the 38-year-old said he would like to start over again in the big screen, hoping to trek through a new territory.

Though Ron opted out of renewing his TVB management contract in 2015, their relationship remains amicable. Currently, the actor is starring in the Shaw Brothers television drama Flying Tiger <飛虎之潛行極戰>, which is currently airing on TVB. In the show, he reunites with Bosco Wong (黃宗澤) to play a pair of half-brothers who respectively play an OCTB agent and an SDU paramilitary officer. Unlike many of his fellow cast members, Ron didn’t need to wear the heavy gear of the SDU outfit, but he has his own struggles.

“Before the SDU are called, I am in charge of pursuing the criminals,” said Ron. “I’m flying solo.  There are also many gunfire scenes and jumping stunts. They’re not easy to do.”

Ron’s first television drama as lead, 2003’s Find the Light <英雄·刀·少年>, was with Bosco. It has now been over 15 years. “It’s interesting,” said Ron. “We haven’t collaborated in many years, and we’ve all met different people and went through our own different experiences. Coming back together, the feeling is different. Both of us have grown.”

Though it’s been over 20 years with TVB, Ron said he doesn’t want to ever stop acting. “After leaving [TVB], I’m starting to feel that I’m looking at things in a different light. Maybe it’s because I’ve broadened my horizons. When I was still with TVB, I would be doing other things besides acting, such as doing variety shows. Now that I’m alone, I can be more focused on doing one thing. There aren’t as many things to consider. Yet, I’m still not bored.”

On returning to TVB to collaborate with old label mates, Ron said, “It really is because of the script and the cast. [Michael Miu 苗僑偉] convinced me to come back to do one more round, and I also haven’t worked with Bosco in many years. We had many things to talk about.”

Ron is also grateful for the opportunity to work with Eddie Cheung (張兆輝), although the two did not share many scenes together. “He’s very comfortable to work with, and he allows me to stretch my wings.”

“Peel Off that Television Flavor”

Although he has set his eyes to doing more Chinese dramas, Ron said he would always stay in Hong Kong. “I have a family here. I also feel that, as an actor, I should try my best to do different things and learn as much as I can.”

Ron’s true goal, however, is to start over as a movie actor. “I really want to try it out. TVB was a good place to train myself. I’ve filmed many dramas, so I think it’s about time for me to try out different things. I want to see how the big screen is like. In the big screen, I’m a rookie. I need to learn more.”

Many of Hong Kong’s most famous movie stars started off as television actors, such as Chow Yun-fat (周潤發), Nick Cheung (張家輝), Louis Koo (古天樂), and Gordon Lam (林家棟). “They are what I strive to be,” said Ron. “I’m sure that with time, I can peel off that television flavor in me.”

“No Time to Date”

When speaking about his love life, Ron shook his head and laughed. “There’s no time to date! (What about your ideal type?) Someone who shares the same interests at me. I am already 38 years old. My other half needs to be at a suitable age.”

He added that while his family hasn’t been pushing him to get married, his mother thinks it is time to have some grandchildren. “I have thought about getting married. Many of my close friends are already married with kids, and they’re all very happy. But I just don’t have time to date now. I do want to have a family, but that will have to wait.”