By addy on October 3, 2016 in Celebrity Weddings, NEWS 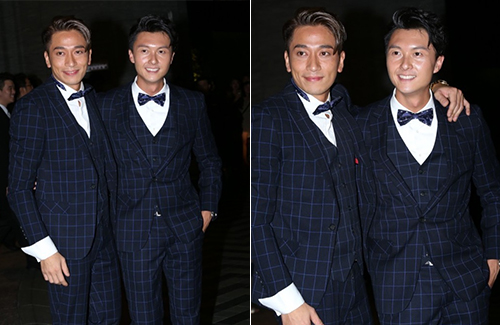 Ron Ng (吳卓羲) and Vincent Wong (王浩信) will do anything to help a brother out.

During their wedding reception, Him surprised Tavia on stage by dressing up as the bear Rilakkuma, a popular Japanese character. Ron and Vincent were in charge of bringing Him, disguised as Rilakkuma, over to Tavia so they could take a picture together.

This surprise was planned last minute. Ron said, “Him Law told us about it only moments before the reception. It was pretty secretive.”

After Him unveiled himself to Tavia, he tried to sing George Lam’s (林子祥) “Need You Every Minute” <分分鐘需要你> to her, but started to cry. Tavia cried with him.

“I cried with them,” said Ron.

Ron expressed that this wedding was his first time acting as a groomsman. “Vincent and I were in charge of drinking for Him.” (What drink?) “Red wine. Him can get a little drunk from just a single can of beer. We’re here to help him out.”

As a close friend of Tavia’s for twenty years, Ron said he will do his best to take care of Him. “His mother asked us to take good care of him, so we will do our best. He really can’t drink!”

Asking Vincent if he’s good at drinking, Vincent immediately said, “I’m not either! Just doing my best. As long as the newlyweds are happy!” (Did you guys drink a lot?) “Actually, not really.”

Vincent said Him’s Rilakkuma surprise was also the part in the wedding that had moved him the most. Ron added that he also felt emotional during the marriage signing ceremony, but didn’t cry. Vincent said, “But I did! Him spoke up about his most heartfelt feelings to everyone. He was already choking back tears when he said the first few words. Couldn’t even say the second.”