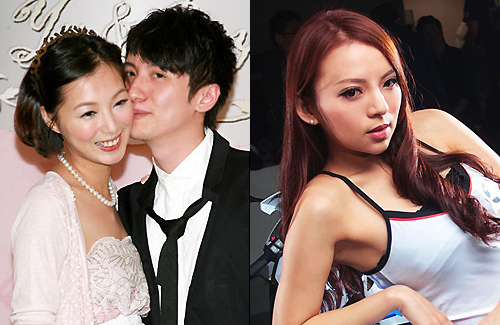 Above: Yu Chiu and Roy Chow’s marriage has been marred by infidelity and domestic abuse.

Yu Chiu and Roy Chow both had short-lived music and acting careers. They appeared in 2004 TVB drama, Shine On You <青出於藍>, where Yu played a rebellious student. In 2004, Roy was charged with drug possession and sentenced to an 18-month probation order. In the same year, he got drunk and was arrested for damaging public property. After the drug scandal, Roy slowly faded from the entertainment industry.

When Yu became pregnant with their first daughter in 2010, the couple got married after dating for 6 years. Prior to their wedding Roy discovered he had a brain tumor and had to undergo surgery. The Christian couple vowed to support each other through illness and health. Roy’s responsibilities as a father increased when their second daughter was born in 2013.

In June, Yu attempted suicide at home and police arrived on the scene. Although the reason for Yu’s attempted suicide was not revealed at the time, the media reported that it was due to Yu being a victim of child molestation by a relative when she was five years old. Speculations now abound that Yu had tried to end her life because she discovered Roy’s infidelity at the time.

On August 24, the couple was arguing over Roy’s extra-marital affair when they visited Roy’s parents. While disputing in the hallway, Roy reportedly shoved Yu onto the ground and caused her face to start bleeding. Although Yu did not immediately call the police, she officially filed a report against Roy on August 29.

Roy did not deny pushing his wife. “We were fighting over some relationship matters and she ran out of the elevator. I pushed her once and then I went back into the house. After hearing her crying and seeing that her chin was hurt, I took her to the hospital. She came home to shower and left home. She still hasn’t returned yet.”

Roy Chow: “I Will Not Get a Divorce”

Emotionally unstable, Roy expressed that his first priority right now is getting in contact with Yu to beg for her forgiveness. Unwilling to have his two daughters grow up in a broken family, Roy said he has reflected on his wrongdoings. “I know this is my fault. I did push Yu and caused her to hurt her chin. I really wish she would forgive me and hope God would forgive me too. I hope everyone will give me some space.”

Roy said that he will not get a divorce. “It is time to settle the matter, instead of generating so much tabloid gossip. I am willing to sacrifice anything to save our marriage.”