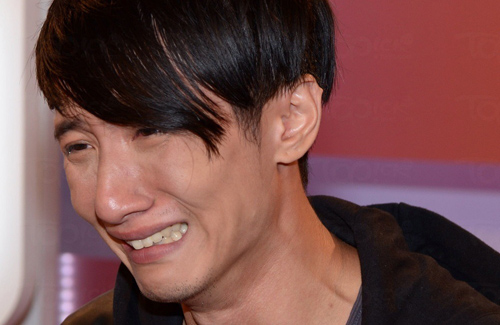 Seen fighting on the streets yesterday, Hong Kong singer Roy Chow (周永恒) was arrested by the police once again.

Although the media has not seen his face in a while, especially after being arrested for physically abusing his ex-wife Chiu Chung Yu (趙頌茹) in 2014, Roy was once again caught in a fist fight near Tsim Sha Tsui. When the police took him away, Roy appeared very mentally unstable and drunk. He knelt to the ground, begging the police for forgiveness.

For the 35-year-old singer, this is not the first time where he was arrested. In 2004, the actor was arrested for possessing illegal drugs and was given an 18-month probation order, only to be seen causing chaos on the streets and ruining public property. That same year, he was arrested again on intimidation and assault charges.

After Roy was caught in a nine-month extramarital affair with model Ruby Lau (劉依靜) in 2014, Chiu Chung Yu filed for divorce to end their four-year marriage although the couple have two daughters together. During that time, Yu also came forth after Roy beat her until her head bled. When the police arrested Roy, he was fined $3000 HKD and sentenced an 18-month binding over order. Still angry, he began appearing outside of Yu’s apartment and screamed profanities and spat on Yu’s mother, resulting in two months of jail time and another 18 months on probation.

Last year in June, Roy married his Mainland girlfriend Britni Chen (陳薇). The couple opened a production company in China and have a son together.

Roy Chow: “I Fantasized About My Wife and Lover in Bed Together!”

Roy Chow Sentenced to 18 Months of Probation for Injuring Wife

5 comments to Roy Chow Arrested for Fighting on Streets