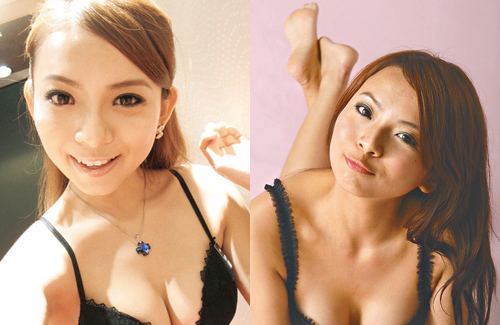 Through private messages, Ruby would exchange nude photos of herself for expert sexual advice. The pornographic photos included those taken with her boyfriend in bed. Although her face would always be censored in the photos, netizens easily recognized “Secretname19” as Ruby due to a mole on her left shoulder. It was also suspicious that “Secretname19” closed her account on the forum at the same time Ruby’s affair with Roy made news headlines.

Despite the speculations, both Roy and Ruby insisted that they did not take any pornographic photos together and denied that they shared such photos online. Ruby worked with Roy at his modeling agency and was attracted by him despite his marital status. Admitting that he had initiated the affair, Roy even introduced Ruby to his wife, Yu. Ruby attended outings with the family and befriended Yu, while allegedly planting the idea of divorce into Yu’s head.

When Yu found out about Roy’s infidelity, the couple’s arguments escalated in intensity. On August 24, Roy roughly shoved Yu to the ground at his mother’s house in Tin Shui Wai while shouting at his wife, “I’m going to kill you!” Roy was sentenced to 18 months of probation after causing Yu’s facial injury.

Although the couple has two young daughters, ages 4 and 2, Yu has not forgiven Roy and has dropped 20 pounds. She has sought legal advice to facilitate the divorce process.