Ruco Chan (陳展鵬) became more easygoing and relaxed after getting married to Phoebe Sin (單文柔) and welcoming the birth of their daughter Quinta. As a busy actor, Ruco appreciates Phoebe’s sacrifices and dedication to their family, “She gives me peace of mind when I go to work.” In return, Ruco is also a very supportive and understanding husband.

Phoebe introduced novelty in his life and changed Ruco’s way of thinking. For example, Ruco used to shy away from social media, but he is now more open in sharing snippets of his daily life with his fans. He said, “I used to be boring. I didn’t know what to say other than work. I wasn’t very interesting. After marriage, I had more topics to talk about.”

Married for three years, Ruco made sure to be more expressive and shower Phoebe with love through actions. Although he is not deliberately romantic, he would pay attention to what she likes. “When shopping, I would remember that Phoebe wanted to try a bakery. I would ask, ‘You said last week you wanted to try it–why don’t we go there together?’”

During Phoebe’s pregnancy, Ruco knew that his wife was nervous and he was worried for her well-being. Although the couple moved to live closer to Phoebe’s mother, she suffered from prenatal depression and continued to struggle emotionally after Quinta’s birth.

“One day, I came home after work at 2 a.m. and saw Phoebe crying uncontrollably. She cried because she couldn’t pump enough breast milk and was scared that our daughter would be hungry. I saw her mental health deteriorated, and I was worried that she would suffer from depression. I told her, ‘You don’t need to sink further. Don’t think too much. I’m here. I can help with bottle feeding.’ Slowly she got better,” Ruco recalled.

Understanding that motherhood is not easy, Ruco tried his best to help Phoebe feel confident and comfortable. “Phoebe would stress about being a good mother, how to breastfeed and allocate time to take care of our daughter. I would tell her that it’s okay if our daughter doesn’t get fed for the full hour.” He continued, “During this time, Phoebe was under a lot of pressure. She wants to do her best, but how can everything be perfect? We need to accept that nothing is perfect.” 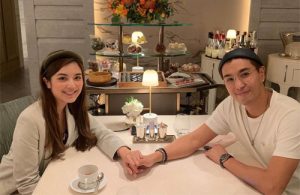 As Phoebe had studied fashion design, she postponed her career goals after becoming a full-time mother. Recognizing her sacrifices for their family, Ruco said, “In these three years, she gave up on her dreams and what she wanted to do. She devoted herself to our family and sacrificed time with friends. My daughter is 2 years old, and she passed the stage where she needs her mother the most. Now that my relatives can also help take care of our daughter, I would tell Phoebe to do what she likes, but she doesn’t seem to want to let go.”

Thankful for how well Phoebe takes care of their family, Ruco feels secure and can focus better when he leaves home for work. “Before I couldn’t understand the comfortable feeling a man has when he goes to work. Phoebe makes me feel very relieved. As I watch my daughter grow up, I know it’s because of Phoebe’s efforts.

“Long ago I wanted to give up on [dating] and stop meeting other women. If it were not for Phoebe’s appearance, I would live a very dry life. She made me very happy, and I thank her for choosing me,” Ruco said.