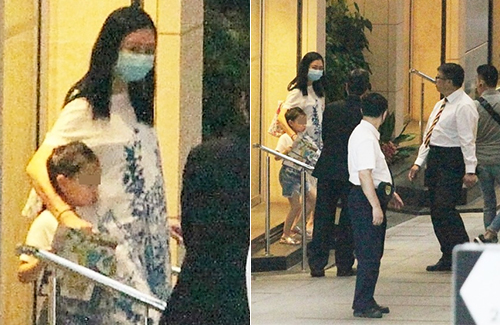 It has been said that the 52-year-old, who has a 6-year-old daughter Hanna with Andy, has always wanted to have more children, but due to her older age, chasing for a pregnancy would be difficult and dangerous.

Rumors of the couple wanting a second child have been circulating for years, prompting Andy to publicly put a stop to the rumors back in September 2016, clarifying that his wife was not pregnant.

A few afternoons ago, the Hong Kong paparazzi spotted Carol out in Central with her daughter and a few bodyguards. Carol was wearing a face mask and a loose floral dress. She appeared to have a bulging belly that even her dress could not contain.

Reporters watched Carol, her daughter, and their bodyguards entering a building, perhaps for a clinical visit. An hour later, Carol emerged and spotted the paparazzi. She quickly left with her daughter and bodyguards.

What do you think of the photos?