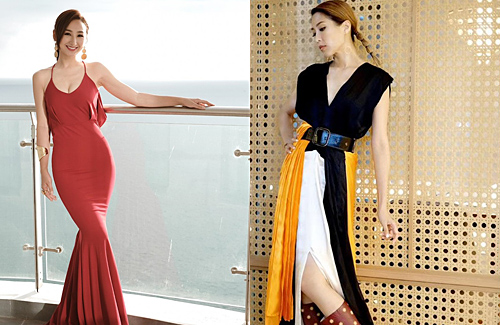 Dressed in a low-cut dress, she was there with three other TVB artistes for a local event.

Samantha was so thrilled by the gorgeous sea views offered in the hotel rooms the celebrities stayed in that she broke into a dance at the balcony. Dressed in a long, red low-cut dress which showed off her back and cleavage, she said, “It’s also my first time in Cambodia. Before coming I had searched about this place, which told me to expect gorgeous sea views which were exactly what I saw upon arriving! I’m elated to have taken many photos and videos.”

In a video she shared on social media, which was believed to be taken from the balcony of her hotel room, she was seen gyrating her hips while enjoying the dazzling sea views. Many celebrity friends have complimented Samantha on her beautiful photos, including actresses Roxanne Tong (湯洛雯), Grace Chan (陳凱琳) and Eliza Sam (岑麗香).

Joel, who had to rush back for filming for a new drama, had to fly back within the same day, but was lucky enough to catch a fireworks display before he left.

As the finale guest performer for the event, Ruco only stayed for a day before departing due to his tight filming schedule. Before his flight, the actor also went “live” on Facebook near the airport, to share Cambodia’s lovely scenery with fans. “There are many foreigners in Phnom Penh. The most beautiful place in Cambodia is actually Angkor Wat, but I haven’t been there! The last time I was here was already five or six years ago.”

As for Sharon, she regretted that there was no time for shopping as the schedule was too tight. “I stayed in the hotel room the entire trip. I had taken a very long car journey, took connecting flights and waited for very long to get here. The travelling is really tiring! This time I had to sing and host as well, so I had been busy rehearsing!”