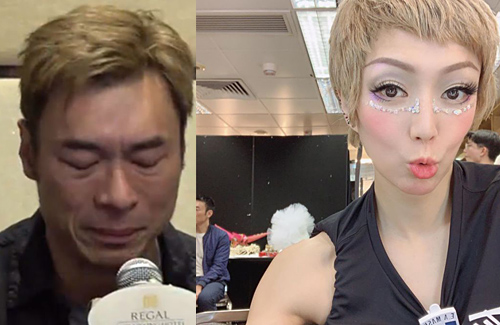 Above: Andy was spotted sitting in the background in Sammi’s latest selfie.

Although two months have passed since Andy Hui (許志安) was caught cheating in his marriage, he is still facing angry backlash from Sammi Cheng’s (鄭秀文) fans. Even though Sammi has forgiven Andy, her fans are unable to look past Andy’s wrongdoings.

Filmed groping Jacqueline Wong (黃心穎) in a taxi, Andy’s image was destroyed and he instantly became one of the most disliked men in Hong Kong. While the negativity has somewhat died down, some of Sammi’s loyal fans continue to harbor intense dislike towards Andy.

Sammi’s hurt still seems fresh, as evident in her sudden crying during her opening concert at the Hong Kong Coliseum. Trying to show his support, Andy watched the concert backstage but avoided speaking with the press afterward.

In Sammi’s recent selfie post, Andy was seen sitting in the background. After seeing the picture, netizens exclaimed that they didn’t want to see Andy in the photos and left snide comments such as, “Always hiding behind your wife’s back” and “The more you try to come clean, the more you make us disgusted.”

One particular fan wrote a lengthy reply to the post, voicing her displeasure in seeing Andy. They wrote, “Go Sammi! But those people who are cheering for Andy must be out of their minds! Sammi’s real fans don’t want to see this terrible man. It’s Sammi’s call for forgiving him, but not wanting to see him is what fans really feel.”