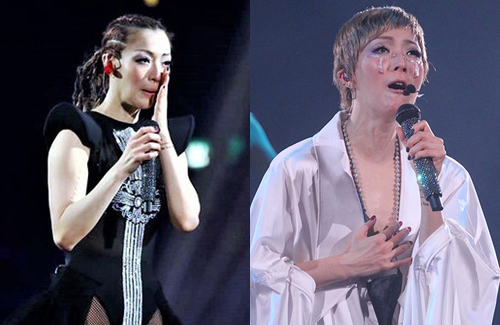 Recalling her life experiences, the singer burst into tears at one point during the show.

Forty-six-year-old singer Sammi Cheng (鄭秀文) held the first show of her “#FOLLOWMi World Tour 2019” at the Hong Kong Coliseum yesterday. Her first public performance since the high profile cheating scandal between her husband Andy Hui (許志安) and TVB actress Jacqueline Wong (黃心穎), the concert was marked by a few emotional moments and not without a few glitches.

Making her entrance in a dramatic white costume while hobbling cautiously on 1-foot high wedge heels, Sammi speedily changed into a neon pink long dress after her first song, appearing in a nude bodysuit after and ignited excitement throughout with her rapid costume changes.

Many of Sammi’s friends from the entertainment circle were there to lend their support. Besides Cherie Chung (鍾楚紅) and Gigi Leung (梁詠琪), also present were socialites Kimbee Chan (陈凯韵), and Michelle Reis (李嘉欣), who sat opposite each other, while Sammi’s husband Andy watched the show from backstage.

Andy arrived at the venue while being driven in at 7:45 a.m. in the evening. He did not smile when he spotted reporters photographing him, and rushed into the venue after alighting from the car.

Wore Her Heart On Her Sleeve

Choosing to forgive Andy even after the cheating episode, Sammi wore her heart on her sleeve during the concert, telling audiences at one point, “If something hurts you badly in your relationship, yet after the pain, your love could grow into one of the (strongest) in the world.” She also seemed to make light of her own situation later, “Don’t disturb your love. Once disturbed there will be serious consequences.”

Before delivering her new single “This is How We Grew Up” <我們都是這樣長大的>, Sammi said, “Growing to this stage, we experience and encounter much, gain insights and come to terms with ourselves. I’d never thought that these songs would become even more popular than my old songs within such a short time, maybe because it touched everyone, as each of us has our own experiences, hurt and tears. But it’s okay, because we all grew up like this.” However, Sammi burst into tears when she launched into the song. 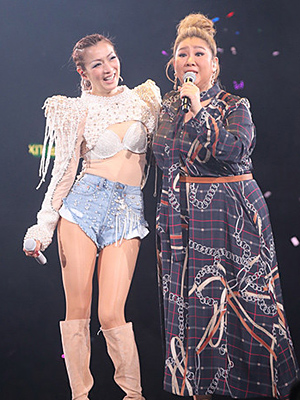 It was guest star Joyce Cheng’s (鄭欣宜) turn to get teary-eyed when the pair sang a song about female empowerment “Goddess” together. Fiona Sit (薛凱琪) was the other guest star for Sammi’s first show last night.

Unexpected Hiccups Did Not Mar the Concert

After delivering the song “Fabulous” <衝過去>, Sammi put on four harness ropes and rose up, gracefully pulling off two somersaults in mid-air to the excitement of fans. However, there were a few hiccups during the concert, such as how Sammi suddenly told fans that her bra seemed to be out of place after gyrating and dancing around onstage in a sexy outfit. She pressed against her chest with her hands to secure it.

At another point, the prolific performer had her signature “Nike” brows on, which threatened to fall off when she was near the end of her song. A concert staff promptly went onstage to secure the embellishment but it came detached again a few moments later. Spontaneously removing the fake brow, Sammi commented that she need not be afraid of getting disadvantaged. However, the word was close to a vulgar word in Cantonese and caused fans to roar with laughter momentarily. At the end of the show, Sammi apologized for the unexpected hiccups during her first show.