After the stunning news of Andy Hui (許志安) and Jacqueline Wong‘s (黃心穎) affair broke out, all of Hong Kong was shocked and angry on behalf of their respective partners: Sammi Cheng (鄭秀文) and Kenneth Ma (馬國明). Andy immediately held a press conference to apologize and announce that he would be stopping all work to reflect on his wrongdoing. However, this did not lead to any change in the wave of negativity towards him. Jacqueline had disappeared from public eye until she resurfaced today to post an apology on Instagram.

Due to the fact that she had not come forward to apologize in person, and instead decided to hide behind TVB executive Virginia Lok (樂易玲), public opinion has been very hostile with many calling for Jacqueline to be fired, her dramas to not be aired, and for Love Come Home: Lo and Behold‘s <愛·回家之開心速遞> theme song to be changed.

A Selfish Person Who Only Loves Herself

Netizens have been busy rehashing Jacqueline’s past romantic rumors and analyzing her personality. They concluded that she is someone that is extremely selfish and will never truly love anyone but herself. If TVB decides to not air her dramas, many of her co-stars will have lost their opportunity especially Owen Cheung (張振朗) who co-stars with her in two upcoming series. Many netizens have decided to take their anger out on her sister’s Instagram as Jacqueline had limited the commenting function on her Instagram.

The Challenge of Seducing a Married Man

When Jacqueline and Kenneth started dating, many thought that she was dating him for promotional purposes and that their relationship would not last. Based on her recent actions, it seems to confirm that she may have never loved him. After winning over Kenneth, she may have become bored and was looking for a new challenge to boost her ego. And what better challenge than the satisfaction of seducing a married man!

Since Andy made his debut, his career and popularity has never been on the same level as Sammi so many have labelled him as a “Soft Rice King” (a relationship where the woman is typically the breadwinner). Jacqueline may have won him over by stroking his ego and pretending to be a die-hard fan. 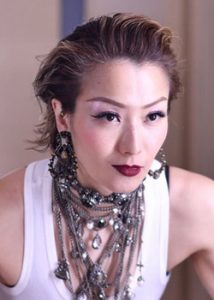 In regards to why she chose Andy, it may be due to the fact that he is married to Cantopop diva Sammi Cheng, and would prove the ultimate challenge. Sammi has been in the entertainment circle for almost 30 years and is well known throughout Asia. Aside from always selling out her concert tickets, Sammi is also a force in Hong Kong film, being director Johnnie To‘s (杜琪峯) favorite actress. She has many friends and no negative news surrounding her. She met Andy 28 years ago while they belonged to the same music label and finally married five years ago after many ups and downs in their relationship. Their love story was labelled as Hong Kong’s last fairy tale by Dayo Wong (黃子華).

It was a calculated move by Jacqueline to befriend Sammi. They went to the gym together and often interacted through Instagram. By doing so, Jacqueline was able to post pictures with Andy without it seeming suspicious and also simultaneously promote herself.

As celebrities, their lives are constantly scrutinized under the spotlight. With such power, they should use it to support those in need and to raise awareness for important issues instead of making such immoral choices. Hopefully, Andy and Jacqueline will use this time to reflect on their behavior and wrongdoing!