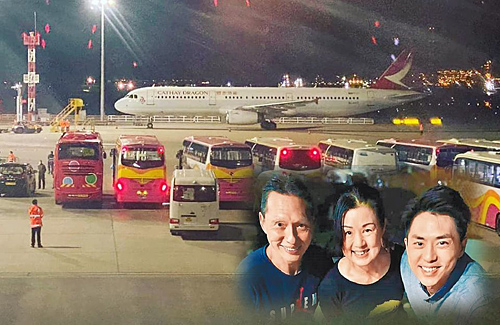 The relieved actor thanked friends for their help and kind wishes.

Chartered flights had been sent by the Hong Kong government to bring its citizens back home from the Diamond Princess Cruise ship, which is docked at Yokohama Port in Japan. The ship quarantined cruise passengers due to a large outbreak of coronavirus, which to-date has 691 confirmed cases on board.

Following the first flight returning to Hong Kong on February 20, the second flight which arrived February 22 to bring the cruise passengers to Chun Yeung Estate for a mandatory two-week quarantine. Among the passengers were actor Sammy Leung’s (森美) parents.

Another 14 Days of Local Quarantine

With many people concerned about the cruise passengers, Sammy has provided updates about his parents’ situation on board the Diamond Princess during media interviews and on his own program Good Morning King <早霸王> on Commercial Radio Hong Kong.

In his social media post, Sammy uploaded an image of the Cathay Dragon plane bringing Hong Kong citizens back, updating about his parents’ safe return, and shared how he felt much assured now that they have returned to Hong Kong. He thanked those who had helped his parents purchase protective clothing, glasses and shoe covers, as well as those who had asked about them, while sending encouraging words to those battling the coronavirus.

Last Friday, Sammy received news that his parents could finally get off the ship and head to the airport. He had responded humorously, “Received a food picture from Dad saying that was his last meal on the ship. I told my parents to remember not to turn their heads back!”

Sammy and his parents intend to celebrate with a meal together after they complete the 14-day quarantine. He joked that his parents may not want to see him, as they would have been quarantined for a total of 28 days and thus be more hygienic than him.