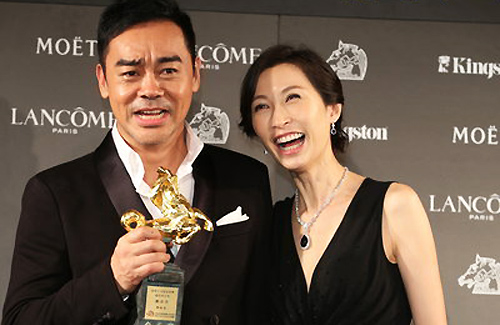 In 1999, Sean Lau (劉青雲) did not win the Golden Horse Best Actor Award for his performance in the film, The Victim <目露凶光>. He did not receive any further nominations at the Golden Horse Film Awards until this year.  Sean said, “It has taken me 13 long years to improve my acting!” He honed his acted skills to deliver his best in every role, without worrying on winning any awards.

Sean feels that acting is his job, and he has a responsibility to have an effect on the audience even after the film is no longer airing in theaters. Despite his hard work and strong work ethics, Sean did not have any luck in winning any awards during his long career of acting. He was nominated for the Best Actor category for the Hong Kong Film award 11 times and finally won one award on his 8th nomination. The Golden Horse Film Awards finally acknowledged Sean’s acting talents by granting him the Best Actor Award for his performance in the film, Life Without Principle <奪命金>.

It took many years to complete Life Without Principle. Sean’s scenes in the movie were shot on and off throughout those years, and once with years in between. Sean said it was amazing experience filming this movie.

Sean is very grateful to his wife, Amy Kwok (郭藹明), a former TVB actress, for her support and encouragement.  Amy has been by his side for every award ceremony, and she would console him on all his past defeats. Sean feels very fortunate to have her to share the happiness that comes from winning an award.

After the ceremony, Amy told the press that she was very touched to watch Sean receive an award. She said in tears, “There are actually so many people who appreciate Sean’s acting. As an actress myself, I know it’s not easy to get this high honor in the entertainment business. Even if we get the nomination, it does not guarantee an award. Sometimes winning an award depends on the person’s luck.”

Amy is the most important person in Sean’s life. He said, “My wife is so precious, and I will not win the Golden Horse Award without her help and support.” Sean revealed that he is able to focus on his acting career, as Amy will help arrange his personal business such as choosing his wardrobe, arranging his travel plans, and making sure he is on time for filming and promotional events.

Sean also feels very lucky to work with many great directors during his career. He knew that winning an award would happen sooner or later. He said, ” Making movies is not just for winning awards. I am joking! Of course, I want to win an award!”