Starring Andy Lau (劉德華) and Jacklyn Wu (吳倩蓮), 1990 classic Hong Kong film A Moment of Romance <天若有情> was late director Benny Chan’s (陳木勝) first movie production under the tutelage of acclaimed director Johnnie To (杜琪峯). In a recent interview, Andy recalled how his insistence led to an unhappy conflict with Johnnie To on set, which was resolved only years later.

Clash of Egos on Set

With A Moment of Romance a massive hit, scenes of Andy riding his motorcycle in the classic movie were indelibly imprinted on the audience, with his hairstyle and wardrobe becoming the very emblem of coolness back then. When he took on the role of male lead in A Moment of Romance, Andy had already attained idol status. 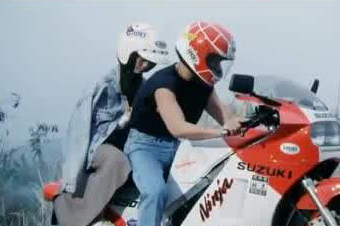 Every time Andy took off his motorcycle helmet on set, he would habitually use his hand to tidy up his hair bangs. However, Johnnie To, who was there to mentor Benny Chan, explicitly told the actor to refrain from doing so, as he felt that the gesture was unlike that of his character’s rugged personality. Though Andy tried to do as told, he found it hard to kick his old habit, angering Johnnie several times. The hot-headed director would then break out in a slew of vulgarities on set in front of the huge cast and crew.

While he could not remember the director’s exact words, Andy remembers hearing vulgarities in various languages. Much like his character’s youthful temperament, Andy got provoked by Johnnie’s constant admonishments and got back at him by deliberately defying him each time Andy had to remove his helmet. Andy would get the hairstylist to help tidy up his hair instead. Naturally, this angered Johnnie even more, and Andy would hear him “muttering with bated breath.”

Concerned by the tension, the production unit did not know how to solve this dilemma, until a veteran actor advised Andy on set, quelling his unhappiness. However, Andy and Johnnie avoided collaborating for some time after filming ended.

It was only in 1996 when Johnnie wanted to film A Moment of Romance 3 <天若有情III之烽火佳人> that the two joined hands again, after Andy approached Johnnie to let him know of his dissatisfaction from back then. “I was really serious in my performance, but he just thought I was merely an idol,” Andy said.

However, talking things through heart-to-heart helped the two men break the ice. Thereafter, they became powerful partners in the industry, producing a string of popular hits including Running Out of Time <暗戰>, Needing You <孤男寡女>, Love On A Diet <瘦身男女>, Yesterday Once More <龍鳳鬥>, Running On Karma <大隻佬>, and Blind Detective <盲探>. Andy’s well-received pairing with Sammi Cheung (鄭秀文) also made for one of the best onscreen couples in Hong Kong cinema.

Though his dashing motorcyclist image on screen had since been immortalized following A Moment in Romance’s success, Andy actually does not know how to ride a motorcycle. Needing You took jibes at this by including a hilarious scene of Andy learning how to ride a motorbike in order to woo back his girlfriend.

Johnnie To Mourns For Benny Chan