Barrack O’Karma <金宵大廈> is excelling in the supernatural horror game, and it’s only going to get darker from here.

In an interview with CRHK, the drama’s lead star Selena Lee (李施嬅) teased that the TVB horror series will be spiraling down a darker path, to the point that even Selena herself was concerned  about the script being too intense for broadcast.

“I literally almost vomited when I first read the script,” she said. “I was like, wow, this is impossible. This can’t go on broadcast. It’s too intense. It made me feel uncomfortable. It’s possible that certain parts may be edited out for broadcast.” 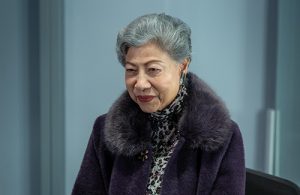 A snippet of the arc was originally meant to be added to the trailer, but Selena said that the editors decided to take it out as it was too horrific.

Selena plays Alex, a flight attendant whom audiences think may be already dead. Selena declined to reveal the true faith of her character, saying, “Would it really be that simple?” She then dropped a spoiler, “The new few episodes should answer a lot of questions.”

Despite her new contract and confirmation to star in “Barrack O’Karma 2”, Selena has not given up on the international market.