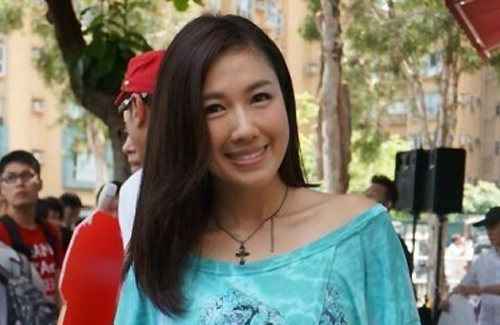 Since breaking up with former flame Patrick Tang (鄧健泓) in 2010, Selena has poured all of her energy into her career and her beauty school. During an earlier interview, Selena shared that she was in an underground relationship with an unnamed man for a year but the two ultimately parted ways due to personality differences.

Recently, the media dug up old photos and claimed that Selena has performed nose surgery in order to improve her love life and attract wealthy bachelors. According to Chinese fortune-tellers, a woman with a high, plump nose will bring her husband prosperity. When asked to address the rumors, Selena calmly explained that she has not received any cosmetic surgery and advised the public to take the report with a grain of salt. “Those photos are from a few years ago… my family and I all have high noses… When I was a teenager I broke my nose while playing basketball and didn’t get treatment. My doctor did advise me to have my nose fixed, but I am really afraid of pain. I also didn’t find it necessary; I was afraid that if anything goes wrong I would have to live with the mistake for the rest of my life. Honestly everyone has flaws; nobody is perfect. I have not had anything done to any part of my body.”

Selena then jokingly thanked the tabloids for pointing out that she looks more beautiful than ever. She added that the paparazzi followed her several times last month but were only able to catch her exercising with friend Kayi Cheung. Since Kayi is a rumored girlfriend of Selena’s former love Patrick Tang, reporters questioned Selena about their friendship. Selena replied with confidence, “I am certain that she is not dating Patrick Tang.”