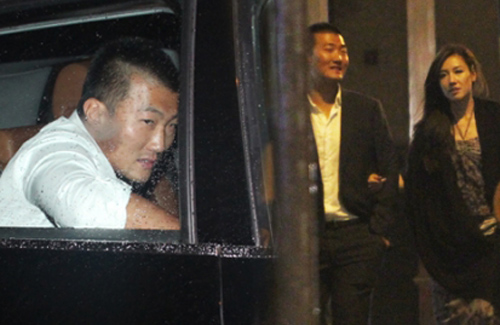 After being romantically linked to numerous males in the past, Selena Li (李詩韻) always firmly denied dating anyone. However, she was spotted coming out of a mall in Central with a mysterious man dressed in a fancy business suit last night. Not long after getting into the car with the man and driving off, Selena stepped out of the car and began walking home after spotting a number of reporters following them.

Obviously annoyed that she had to walk home on foot instead of getting a ride, Selena crossly said to the paparazzi, “Can you not be like this, you guys have made me suffer enough already.” Perhaps Selena was irritated since she wanted to protect the man in the car since he does not work in the entertainment industry.

In contrast to last night’s behavior, Selena’s mood was much more cheerful this morning. On her Weibo blog, she posted a photo of herself holding a large bouquet of flowers. Selena openly admitted to having a boyfriend, “The peach blossoms have found a husband, and I have finally found someone who loves me very much! I feel blessed! I hope everyone will give us some space for development so we can be happy! Thank you for the concern regarding my love life!”

Selena’s ex-boyfriend, Patrick Tang (鄧健泓) said he has not seen the latest reports about Selena’s new boyfriend. Patrick said, “But I’m happy for her and wish her the best.” Asked if Selena has found the right person to settle down with, Patrick said, “She knows whether she will get married or not. She is with him because they’re happy together.”

Although frequently romantically linked with Selena, Kenneth Ma (馬國明) said that he will not feel awkward when he works together with his good friend again. He said, “Congratulations that she has found the right person! We only laughed about our rumors in the past!”