Shiga Lin (連詩雅), Raymond Lam (林峯), and Chrissie Chau (周秀娜) have been hard at work filming web drama In the Storm <黑金風暴> in the raging hot summer. Filming outdoors every day, many of the cast and crew experienced signs of heat stroke. Trying to lighten the mood, Raymond continued talking happily with everyone to keep the team spirit going.

In the beginning of the year, the cast had quarantined in China and filmed there for two months. Afterwards, they continued filming for another two months in Hong Kong and is approaching the end of the filming now.

In the drama, Shiga plays a tomboy police officer who has a romantic relationship with Raymond Wong (黃浩然). After taking on the role, Shiga noted she has become manlier in her mannerisms. There have definitely been a lot of firsts for Shiga this year, including filming such an action-heavy drama with gunfights.

When asked if her rumored boyfriend Carlos Chan (陳家樂) thought she also got manlier, Shiga laughed and said that she would not reveal those details. As to whether or not she celebrated his birthday with him, she said, “I’m not going to share. I had to work on my own birthday, so we usually all just celebrate at work.”

As the pandemic deeply affected her income, Shiga wants more filming projects this year. After wrapping up In the Storm, Shiga will film TVB drama The Spectator <旁觀者> until September.

Commenting on the team spirit on set, Shiga was full of praise towards Raymond, “He is very nice, and takes care of the people around him. He always treats Chrissie and I to dinner. Even though I want to treat them, he always beats me to the bill. One time I treated everyone to popsicles when we were filming at Nam Sang Wai, but they weren’t there.”

On the filming set that day, the cast became drenched in sweat after completing their scenes.  Raymond immediately grabbed his portable fan to cool down, while Chrissie wiped her sweat with a tissue. Afterwards, they all sat together in the car to enjoy some air conditioning during which Shiga took some photos for memories. 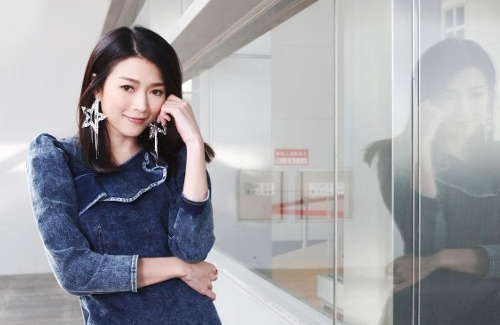 Though completely focused on her career, Shiga still hopes for marriage in the future.