As its name suggests, new Hong Kong film The Infernal Walker <無間行者之生死潛行> is Infernal Affairs <無間道> meets Line Walker <使徒行者>.  Michael Tse (謝天華) and Pakho Chau‘s (周柏豪) characters are an undercover cop and a mole in the police force respectively who yearn to truly live the life of an upright cop. As they peel away the layers of each other’s secret identities and face off, only one person can get out alive. 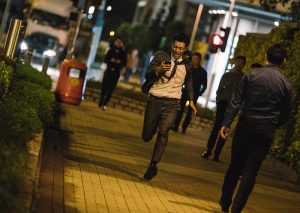 A critical scene in Infernal Walker is when Pakho’s cover is blown and revenge is exacted on his fiancé (Shiga Lin). When her character was shot, she was lying on the floor listening to Pakho agonizing screams. Shiga praised Pakho for his emotional performance.

The emotional scene was not difficult to pull off, as Pakho and Shiga have known each other for over 10 years and have great chemistry onscreen. Frequent collaborators in music projects and movies, Pakho is happy to work with Shiga again, and Infernal Walker marks the fourth time they are acting as a couple.

Shiga disclosed that they originally did not have any kissing scene, but the director added it at the last minute. “The scene talks about Pakho and I going to look at houses and furniture, so it naturally led to us kissing.” Even though the scene was added without advance notice, they were able to handle it without awkwardness as they are very close friends.

Pakho pointed out they previously shared a passionate kiss scene in The Sinking City: Capsule Odyssey <西謊極落: 太爆. 太子. 太空艙>. “At the time, she was crying during our kiss, so I drank a lot of her salty tears.” With this past experience, Pakho did not feel awkward at all, and his wife felt very assured once learning that his co-star was Shiga.

The Infernal Walker will release in Hong Kong theaters on November 19, 2020.