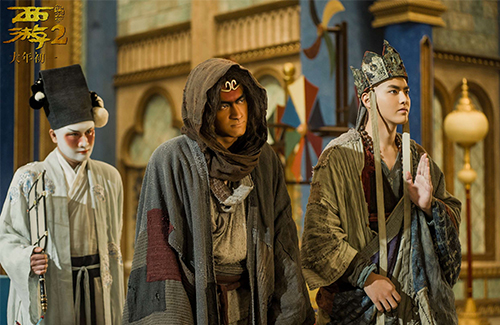 The Year of the Rooster is starting off great for Stephen Chow (周星馳), who released his film Journey to the West: The Demons Strike Back <西遊伏妖篇> on Lunar New Year.

The film, sequel to 2013’s Conquering the Demons <西遊降魔篇>, grossed over 360 million RMB (approximately $406 million HKD) on its opening day, putting it as the biggest single day and opening day for a local Chinese film. The previous film to hold this record was last year’s The Mermaid <美人魚>, which grossed 270 million RMB on the first day. The Mermaid was directed and produced by Stephen.

The biggest opening day for a film in China, however, is still headed by the Hollywood action flick Furious 7, which opened to 391 million RMB in 2015.

The Demons Strike Back, produced and written by Stephen but directed by Tsui Hark (徐克), is based on the literary classic Journey to the West and tells the story of a Buddhist monk Tang Sanzang (Kris Wu 吳亦凡), who recruits Zhu Bajie, Sha Wujing, and Sun Wukong—also known as the Monkey King—to go on a journey to the west—though all for their own reasons.