After publicly announcing their relationship in July 2018, Hong Kong actress Stephy Tang (鄧麗欣) and Taiwanese singer/actor Prince Chiu (邱勝翊) are not shy in displaying their affection for each other. Although their long-distance relationship is often marked by separations due to their work, Stephy and Prince would fly back and forth between Hong Kong and Taiwan and stay at each other’s homes to get more quality time together. The beautiful couple recently filmed a new ad together, and shared photos on their social media. 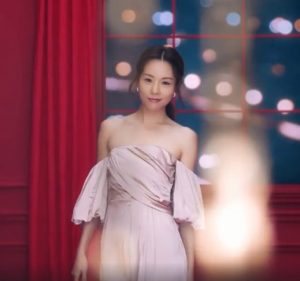 In the commercial, Stephy wears a beautiful pale pink dress, which gives her a princess look, while Prince wears a full white tuxedo. Through communication between Cantonese and Mandarin, the two can be seen dancing together in Christmas-like environment.

Fans loved the couple’s beautiful interaction and left messages on Facebook, which included: “So sweet,” and “I need to wear sunglasses” due to Stephy and Prince’s glowing looks at each other.

Stephy wrote in response, “Light up your heart. May your heart be your guiding key.” Prince Chiu also responded, “Thanks for having us.”