Steven Ma Happy Over DITROC Success: “I Will Share a Nude Photo” 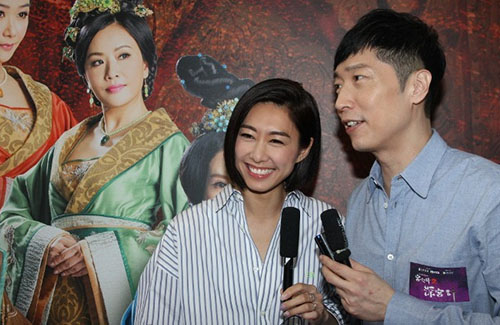 The cast of TVB’s Deep in the Realm of Conscience <宮心計2深宮計> including Steven Ma (馬浚偉) and Nancy Wu (胡定欣) attended a promotional event together for their new show. The duo shared at the event that their new series has reached over 930 million views online, and is on track to hit the 1 billion mark. In terms of live viewership ratings in Hong Kong, the series averaged 27.3 points last week—easily 2018’s highest-rated drama of the year.

“Tonight and tomorrow’s episode is filled with angst,” introduced Steven. “Some fans in Mainland China, who have VIP membership, were able to watch two episodes ahead of us, so they’ve already finished the first 15 episodes. They all said it was cruel! For us [the Hong Kong audiences], please lock yourself in front of the TV and anticipate the upcoming two episodes!”

Steven said he is very happy with the show’s ratings, adding, “I’ve already prepared a half-naked picture for you all, as promised.” Nancy said, “That’s true! I’ve seen it already.”

Steven also revealed that he has photos of himself fully nude. They were photos he took when he was only an infant. “I actually want to show the fully naked one,” said Steven. Nancy asked, “You’re really confident in your body, aren’t you?” Steven answered with a laugh, “Yes, very confident with the fully naked one!”

The co-stars are also preparing another show together—Steven’s stage play Fortuitousness: Xu Zhimo <偶然·徐志摩>, in which Nancy plays the female lead. Steven said Nancy is an exceptional dancer and singer, which was one of the reasons why he chose her for the part.

“I’ve heard her practicing Kunqu, and she’s definitely ready to be on stage,” he said. Nancy joked, “I do hope to perform it live. I don’t want to disappoint anyone, and though I do have the confidence, [Steven] didn’t give me much of a reaction when I sang it. Maybe it’s because he has low standards.”

In related news Eunice Lam (林燕妮), a well-known columnist, writer, and businesswoman, passed away on June 4th from lung cancer. Steven was close to Eunice, and will be attending her funeral on June 26.

Steven said, “Both of us are Christians, so we see death in a different way. We will all eventually meet each other in heaven, so I will not be too sad about it. I did get the chance to meet her one last time before she passed. We chatted for over an hour, and she was still glowing. I met her over twenty years ago, in ’96. I’ve always referred to her as ‘royalty’, while she just called me ‘Chun-wei.’”

7 comments to Steven Ma Happy Over DITROC Success: “I Will Share a Nude Photo”