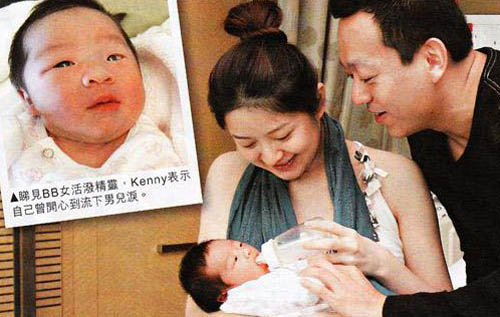 Suki Chui Suk Man gave birth to daughter, Vianna, on March 15th. Husband, Kenny Wong Ho, witnessed the birth of their daughter and could not hold back tears of joy and wonder. On March 20th, Suki and Vianna went home from the hospital. Both Suki and Kenny’s parents bestowed Vianna with gifts. Kenny’s parents gave gold jewelry.

During her pregnancy, Suki gained quite a bit of weight. Did Kenny mind Suki’s increased size? “No, it’s not a bad thing. Actually, it’s a good thing.” Does Kenny hope that Vianna will inherit Suki’s great figure? “Of course!”

Suki is currently breastfeeding. Since Vianna was born, Suki has taken numerous photos and spent her free time talking to the adorable baby. Suki has only been sleeping three hours each night. Suki said her most important task at hand was to take care of her body, to prepare for future pregnancies. Once Suki slims down, she intends to resume her career in the entertainment industry.

Jayne: Suki’s sudden pregnancy was a shock to me. She was one of the prettiest Miss Hong participants in recent years and TVB was obviously giving her good exposure. While her role in “Rosy Business” didn’t quite stretch her acting abilities, she was perky and beautiful to look at. I guess Suki is not as ambitious as Fala Chen in her drive to the top and putting her career forecast. Or perhaps not every beautiful actress has the ambition, stamina, and networking abilities to climb to the top.

In Suki’s absence, Koni Lui seems to have stepped in to fill the promotional needs of sponsors. Among the two, I still prefer Suki. She has a very endearing smile.