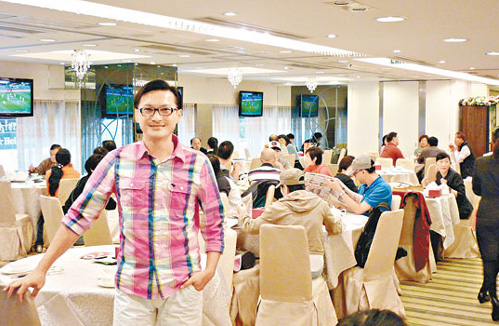 Filming numerous series in the past, Sunny Chan (陳錦鴻) realized that an acting career may not be viable in the long-term. In order to be a responsible husband and father, Sunny harbored an early interest to start a restaurant business. Numerous celebrities and Sunny’s colleagues would often hold special events at his restaurant. Since Sunny served as a spokesperson for the restaurant, this brought upon much liveliness and business.

In 2003, Sunny Chan founded a restaurant business. The onset of SARS did not impact his business; however, in order to focus on being a good father, Sunny closed his restaurant in 2007 to care for his son. In 2010, Sunny opened his new restaurant in Hong Kong and second restaurant in Guangzhou under his friend’s recommendation. The only change from his initial business was that Sunny’s restaurants offer Cantonese food instead of Chaozhou food.

Sunny smiled, “Several years ago, I had to care for my son and did not have time to manage my restaurant. This time, I am opening a new restaurant because I want to return the favors I owe the investors.”

As a second-time business owner, Sunny established the right balance between acting, running his business, and taking care of his family. This was due to Sunny’s younger sister stepping in to help manage the restaurant. When Sunny has time, he will go to the restaurant to try out the dishes and control the quality of the food. Numerous artists and colleagues chose Sunny’s restaurant as the venue to watch the premier and ending broadcasts of TVB series over dinner.

Sunny stated seriously, “Since I have to act and take care of my son; it will be a long way to pay for the education expenses. Acting is not a viable long-term career. If I do not have any filming engagements in the future, I will still have my own business as a financial resource. My family will have a place to drink tea and eat meals! Jayne: I do recall that Sunny had opened a restaurant years ago, just didn’t realize that he had closed it down in order to care for his son more. I admire Sunny as a loving father and his ability to think forward to the future: balancing family, acting, and running a business! Wish Sunny lots of luck!