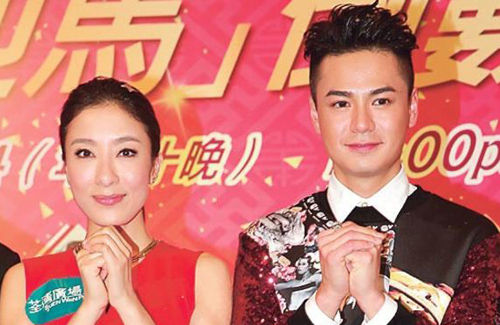 Yesterday, Tavia Yeung (楊怡), Kenneth Ma (馬國明), Him Law (羅仲謙), Mandy Wong (黃智雯), and Benjamin Yuen (袁偉豪) were invited to attend a Lunar New Year countdown show, where they performed songs and interacted with the fans. The Hippocratic Crush <On Call 36小時> stars dressed smartly in red and black to welcome the  New Year of the Wooden Horse.

Appearing at the same event together, celebrity couple Tavia and Him naturally took the spotlight of the stage, and the MC also teased them with questions about their love life. Tavia revealed that her mother has a habit of making New Year cakes for family friends every year, but when the MC asked if her mother had saved a piece for Him, Tavia immediately added, “You can only get cake if you pay us a New Year visit.”

Though Tavia and Him attempted to stay clear of each other during the show’s festival games, their costars enjoyed putting them on the spot. During the group photo-taking session, Kenneth purposely stood further away from Tavia so Him could stand next to her. The photo was teased to be a ‘photo of love’.

When Tavia was pried with more questions on Him, her responses were general and she often tried to change the subject. Asked if she plans on inviting Him to her house for a New Year visit, she said, “It makes sense to have the younger generation greet their seniors for New Year,” Tavia said. She revealed that Him has met her family before. Asked if her mother had any comments about Him, Tavia said, “Nothing special. That’s old-fashioned!”

Did Tavia give any tips to Him about how to please his future mother-in-law? “What? Future what? I don’t really have any tips to give, but maybe don’t give simple chocolate as a gift.”

As for whether or not the couple plans to spend Valentine’s Day together, Tavia explained that she would be busy filming a drama that day, but welcomes Him to visit the set.  She already prepared chocolate for the cast and crew members. Had she prepared anything for Him? Tavia said, “You have to ask him.” Teasing that Him plans on giving Tavia a ring, she said, “Don’t trick me! Work should come first.”

Asked if Tavia would make any special announcements for the upcoming year, she wittily said, “I’ve already washed myself with pomelo leaves so all the good things will come.” What about love? Tavia quickly changed the topic, “Then I’ll spin around three times whenever I see peach blossoms! I meant the peach blossom trees!”