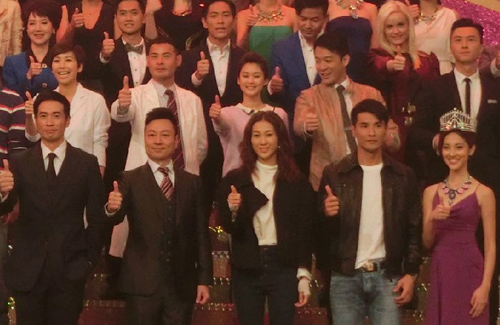 TVB’s 46th Anniversary Lighting Ceremony was held on October 4. Cast members for this year’s two anniversary series, The Hippocratic Crush 2 <On Call 36小時II> and Will Power <法外風雲>, as well as the currently broadcast Brother’s Keeper <巨輪>, promoted their productions onstage.

With the annual TVB Anniversary Awards coming along in December, the hype over who will win Best Actor and Best Actress has started again. However, the winner of this year’s Best Actress award seems to remain unpredictable at the moment. Linda Chung (鍾嘉欣), who received much attention for her acting skills in the prank show, Office of Practical Jokes <玩嘢王>, expressed she stands a chance but will take things easily. “Daddy Ha Yu <夏雨> has taught me to be confident. Or else why would I be in this industry?”

Tavia Yeung (楊怡), who won Best Actress last year, said she hopes Linda will receive the award and become the new TV Queen. “I want Linda to receive it more than me getting it twice. First of all, she’s my good friend. Secondly, I’ve also been watching Brother’s Keeper, and I think her character is very refreshing. [Her performance] this year is well-rounded.”

Kenneth Ma and Wayne Lai Have No Confidence in Winning?

On the other hand, there is much competition for the TV King title. When asked if Kenneth Ma’s (馬國明) performance in The Hippocratic Crush 2 will win him the award, he admitted, “I don’t think I have a chance this year since there are so many strong contenders. For example, Wayne Lai (黎耀祥), Moses Chan (陳豪), Dayo Wong (黃子華), Francis Ng (吳鎮宇), and Chilam Cheung (張智霖). If I get nominated into top 5, I would feel as if I won!”

Having won TV King for three years, Wayne admitted he does not have much confidence to receive the award a fourth time. Similar to Kenneth, he is satisfied if he is nominated into top 5. “There are Francis and Chilam this year. I also really look forward to Dayo’s performance in My Prime Lady <My盛Lady>. I heard he has a brand new way of acting. He’s also a very strong contender.”