Tavia Yeung: “Marriage is About Give and Take” 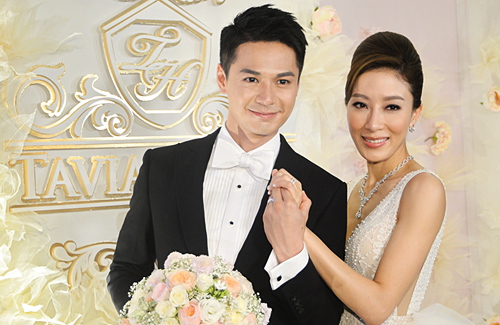 Portraying a villainous power couple with Roger Kwok (郭晉安) in TVB drama Another Era <再創世紀>, Tavia Yeung (楊怡) feels that she would not cut it as a strong-willed businesswoman in real life as she does not have the forcefulness nor sharp wits required.

However, she is glad that being an actress gives her the opportunity to take on an entirely different persona. “I feel that everyone of has destructive instincts within, which might sometimes show up as ill intent or a façade of defense against others. Being an actress allows me to express this darker side of human nature.”

The 39-year-old actress, who left TVB in 2016 and got married with Him Law (羅仲謙)  shortly after, shares that in real life, she seems to have taken on the role of a part-time plumber and repairman after marriage.

Sharing that Him is less than savvy with electrical and household devices, Tavia is often the one to deal with household tasks such as repairing the vacuum cleaner while he is engrossed in playing games. Tavia will also get hands-on to move heavy delivery parcels into their home when Him is away. “My mom couldn’t help commenting that Him should be the one doing all these chores…but I often end up doing these on my own, except for those (tasks) I’m not tall enough!”

Despite this, Tavia said she has been enjoying every bit of married life so far. “Every marriage starts off starry-eyed, but arguments and challenges are bound to crop up as you go along.” Adding that the key to marriage is how one manages this special phase as well as one’s expectations, she said, “Even if you love a man very much, you’ll still be upset with him when you’re arguing. Similarly, even if you love a particular food, you won’t be able to stomach it if you’re feeling unwell or bloated.”

7 comments to Tavia Yeung: “Marriage is About Give and Take”