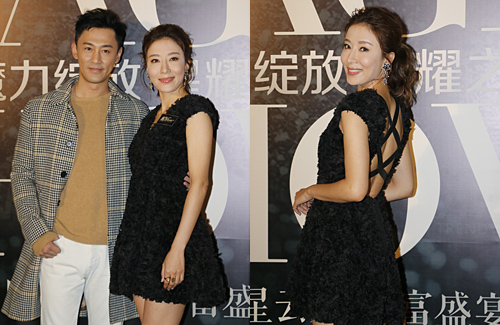 Pulling in their star power at Tseung Kwan O for a function are celebrity pals Raymond Lam (林峰) and Tavia Yeung (杨怡), with him looking suave in houndstooth plaids and her in a sexy but elegant criss-cross back dress.

The longtime friends met up recently with graduates from TVB’s 13th acting class to celebrate Tavia’s birthday, which Carina Zhang (张馨月) – Raymond’s lingerie model girlfriend – also attended. When asked about Carina, Tavia described her as a nice and likeable girl who got along well with their group of friends, sharing that she feels happy for Raymond. Tavia said, “Each time I see him, I tell him to get married quickly since it’s about the right time.” Asked if Raymond will take her advice, she said, “He won’t listen to me. He has his own ideas. No need to push him.”

While declining any interviews, Raymond was spotted at the wedding of Carina’s younger brother, a sign that the couple’s relationship is progressing well on track.

As for herself, Tavia revealed that husband Him Law (羅仲謙) has returned to Hong Kong after wrapping up filming for a movie in Mainland China, and will be staying put for some time. When teased that this would be a good chance for the married couple to speed up their baby-making plans, the star cheekily replied without missing a beat, “Hopefully, as you say! Not this topic yet again! I’m leaving first, haha.”