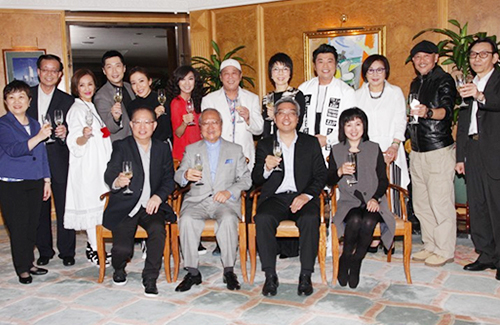 Lau and Mui, who have each produced many classics for TVB in the past, left the broadcaster for the Now TV cable channel in 2012. They returned to TVB earlier this year, and were promoted to directors of the drama department. Among Lau and Mui’s most famous recent TVB works include the Heart of Greed <溏心風暴> series, 2009’s Beyond the Realm of Conscience <宮心計>, and 2010’s Can’t Buy Me Love <公主嫁到>.

Tavia, who starred in both Heart of Greed and its second installment Moonlight Resonance <溏心風暴之家好月圓>, said she would like to take part in the third serial. The actress, whose TVB contract expired earlier this month, said, “I’m still negotiating a new contract with TVB. If [Heart of Greed 3] gets the green light, I would like for the original cast to return.”

What if TVB decided to call her husband, Him Law (羅仲謙), to star in the show with her? Tavia laughed and said, “It really depends on the topic of the story and the gimmick. If this gimmick is able to provide a fresh new element to the show, it really doesn’t matter who they cast. If they really do cast Him, I’ll be completely fine with it. It really depends on how the story is written.”

Susanna, who will turn 58 years old in May, said she is also interested in doing Heart of Greed 3, but is unsure if her body would be able to handle the stresses of filming.