Tavia Yeung to Kiss Samantha Ko in “Eye in the Sky” 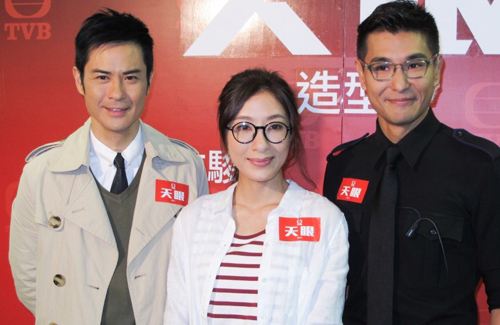 Kevin Cheng (鄭嘉穎), Ruco Chan (陳展鵬), and Tavia Yeung (楊怡) will spark fresh chemistry with their upcoming roles in new TVB crime thriller, Eye in the Sky <天眼>. In the series, Kevin and Ruco portray brothers, in which Kevin is a policeman while Ruco is the ultimate villain. Tavia portrays a private investigator, who later becomes romantically linked to both men.

Kevin revealed he will share intimate scenes with Tavia, but there will only be one kissing scene. However, the scene will replay several times throughout the series. When asked if Kevin should request permission beforehand from Tavia’s compatible onscreen partner, Kenneth Ma <馬國明>, he laughed and exclaimed, “Why should I need to ask him? Shouldn’t I be asking Him Law (羅仲謙) instead?”

With the chance to share romantic ties to both Kevin and Ruco, Tavia feels very lucky. Earlier, Ruco also remarked he needs to ask Kenneth for permission before filming a kissing scene with Tavia. Like Kevin, she wanted to know, “Why is there a need to ask him?” Instead, Tavia looks forward to sharing a kissing scene with Samantha Ko (高海寧), since it is a new experience. The kiss will take place when the two girls pretend to be lesbians in front of Tavia’s father to avoid him from introducing her to different men.

To celebrate Mother’s Day on May 11, Tavia will take her mother out for tea and give her flowers. Asked if she has plans to celebrate with Him Law’s mother, Tavia revealed she would send a text message and ask her out to eat if there is time. Asked if the two families will dine together, Tavia expressed, “We’re not like that, and we’re not too familiar. I never bring my mother along even if I dine out with friends!”

On the other hand, Ruco’s TVB management contract is coming to an end, and he reportedly voiced big demands for a salary increase. Ruco expressed, “What’s considered big, and what’s considered small? TVB has its own system, and it’s fine as long as I’m happy.”

Ruco added that the reports were false, and his contract renewal is not a big issue because he will remain at the company to film. “It’s not even time to discuss the matter yet, so I don’t need to be rushed into thinking about the conditions. Actually, every artiste hopes for a double win. TVB is a large platform, and hopefully it can extend to other places.”