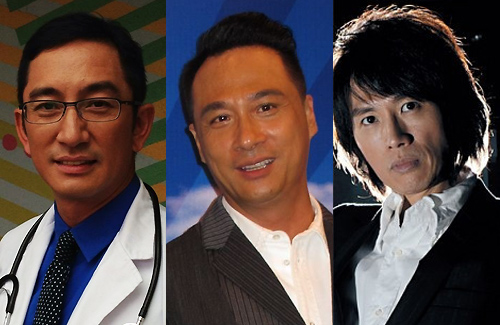 While entertainers from all around the world are getting younger and younger, Hong Kong entertainers are witnessing a backwards trend.  Gone are the times when TVB dramas used to have young, animated, blossoming, and abled leading actors to liven up our television screens. It is now time for a new age – the age of TVB uncles.

TVB is not completely out of young actors. Although these budding newer actors are not nearly as tender as the leading stars of the 80s, 90s, or even of the early millennium, they are nonetheless young, growing, and have bright futures ahead of them. Ruco Chan (陳展鵬), Edwin Siu (蕭正楠), Jason Chan (陳智燊), Him Law (羅仲謙), and Oscar Leung (梁烈唯) are some of our most recent rising stars.

Despite this, none of these newer stars are able to carry an entire drama on their own, aside from Ruco. Him and Oscar are still billed as supporting actors. Jason is still not ready to carry his own drama, as proven from the poor reviews of Jason’s first leading project, Missing You<幸福摩天輪>. Edwin has yet to prove himself as a competent leading actor. Even Ruco, TVB’s fastest rising star in recent years, has not had the chance to perform in a highly-rated television drama with him credited as the lead after The Other Truth <真相>.

The 51-year-old Francis Ng (吳鎮宇) is the next uncle in line. The 51-year-old actor will have relationships with both Myolie Wu (胡杏兒) and Fala Chen (陳法拉), 33 and 31 years old respectively, in the upcoming Triumph in the Skies 2 <衝上雲宵II>.

Wayne Lai (黎耀祥) and Natalie Tong (唐詩詠) will also share another thundering May-December romance. The Bullet Brain <神探高倫布> couple is 17 years apart. In the upcoming blockbuster Rosy Business 3 <巾幗梟雄之諜血長天>, Wayne will be pairing up with Myolie, who is 15 years his junior.

The 33-year-old Niki Chow (周麗淇) will be having a relationship with the 54-year-old Michael Miu (苗僑偉) in A Change of Heart <好心作怪>. The onscreen couple also shared a passionate kiss, which was shown in the drama’s sales presentation teaser trailer.

Dayo Wong (黃子華), currently working on the production of his upcoming TVB comeback, announced last month that the 33-year-old Kate Tsui (徐子珊) will be the female lead of his upcoming comedy-drama. Kate is 19 years younger than Dayo.

The 28-year-old Linda Chung (鍾嘉欣) was recently announced to be replacing Jessica Hsuan’s (宣萱) position as female lead in Tiger Cubs 2 <飛虎II>. She will be a new love interest of Joe Ma’s (馬德鐘) character, Chin Hon To. Joe is 44 years old.

This new May-December romance trend in TVB dramas are not without its criticisms. A netizen predicted that the new trend is for the sake of boosting gossip and publicity, “One year was character death, the next year was rape, and this year is May-December romances. Next year will probably be homosexual romances. [TVB’s] flavor is getting heavier. They must have nothing else to write about anymore.”

Another netizen commented, “These male actors are charismatic and manly, but where did all the siu sangs go?”

176 comments to The Return of TVB Uncles: Male Leads Pushing 50