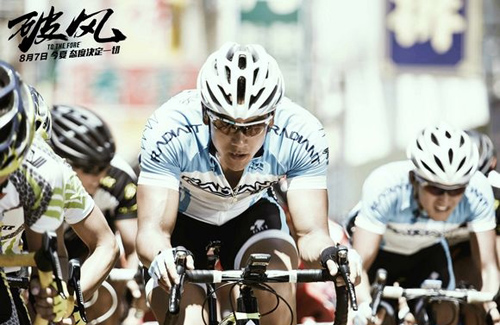 Produced by the Emperor Group and directed by Dante Lam (林超賢), cycling film To The Fore <破風> has been selected to represent Hong Kong’s submission in the Best Foreign Film category at the 88th Academy Awards. Dante was overjoyed when he received news of the selection.

As one of the lead actors, Eddie Peng (彭于晏) is delighted with To The Fore‘s submission, “Being selected [to represent Hong Kong] for the Best Foreign Film award is a big honor and great encouragement. I hope more foreign audiences and filmmakers will see that the Chinese film industry can also produce great sports films! I’m thankful to Dante for having given me this opportunity.”

Choi Si Won (崔始源), who is a member of South Korean boyband, Super Junior, is also very excited. He said, “When I received this unbelievable news, I was elated! I’m so honored to have had the chance to participate in this film, and I wish to share my joy with the director, Eddie Peng, and everyone else who had a part to play! Thank you very much!”

Carlos Chen (陳家樂), also a member of the cast, said, “Congratulations to Emperor Group and director Dante Lam! I feel so honored to be a part of this. Hope we can all get together and have a celebration!”

Released in August this year, To The Fore centers on the world of competitive cycling and deals with the intense mental and emotional journeys that the characters endure as they prepare for their cycling races.