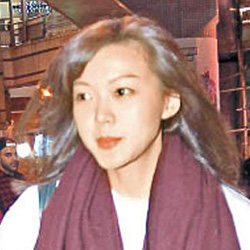 Despite rumors of Tony and Natalie getting back together this past May, both have moved on to new prospects. An avid runner, and someone who frequently takes parts in marathons, Tony and Inez saw each other frequently during these activities and eventually started dating.

Evidently trying to spend more time with his new girlfriend, Tony frequently took some time in between functions to meet up with Inez, even though he has been busy promoting his newest drama The Learning Curve of a Warlord <大帥哥>

Yesterday, Tony and Inez were seen leaving the apartment together. In contrast to the model who seemed awkward when she saw the cameras, Tony smiled when he spotted the reporters. He even said, “Please don’t take anymore pictures, you’ll scare her.”

Although the relationship was just revealed by the media, netizens soon uncovered that Inez actually still had a steady boyfriend of two years this August and wondered if Tony knew about this. In a phone interview, Tony expressed that they’re still trying to get to know each other. Tony said, “She doesn’t have a boyfriend, well at least I don’t think so. I’m very sure she doesn’t.”