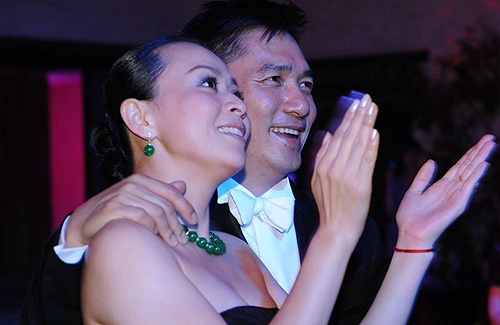 Because of their busy work schedules, celebrity couple, Carina Lau (劉嘉玲) and Tony Leung (梁朝偉) had to celebrate their 5th wedding anniversary separately. But the romantic Tony surprised Carina with a surprise gift even though he could not be with her physically.

After going through a relationship spanning approximately 20 years, being in two separate countries is only a minor obstacle for Carina and Tony. While Carina was in Greece filming, Tony was in the United States to promote his movie, The Grandmaster <一代宗師>. For the A-list couple, they are frequently separated due to work.

In July 2008, Carina and Tony got married with a wedding reception in Bhutan. Aside from their vacation two years ago, the couple had little time for each other on their wedding anniversaries. Because work took away most of their time, they ended up having low-profiled celebrations instead.

This year was not much different. Asked how she was going to celebrate their anniversary, Carina did not see the possibility of Tony making a surprise appearance in Greece because of his work commitments. It was reported that he had secretly arranged to send her a large bouquet of flowers to be delivered to Carina at her hotel on the special day.