Tracy Chu’s Sisters Wanted Her to Introduce Guys to Them 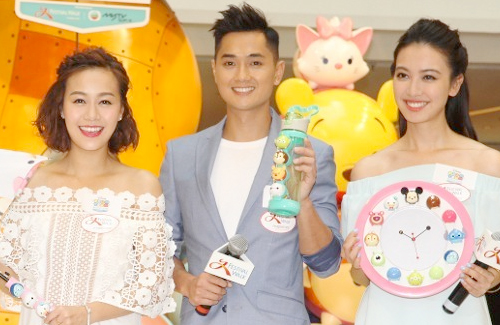 Tracy Chu (朱千雪), Fred Cheng (鄭俊弘), and Jacqueline Wong (黃心穎) attended an event in Kowloon Tong for Disney’s Tsum Tsum exhibition and related mobile games. The Over Run Over <EU超時任務> star said she’s always been a gamer, and her obsession with gaming was so bad her parents didn’t allow her to play video games until after she entered college.

“My parents didn’t let me play games when I was younger. Once I start playing, I wouldn’t know how to stop. I once played a mobile game nonstop for three to four hours while on a flight. I could totally stay up all night to play just one game. My parents didn’t really let me play until after college. It’s a good thing they did!”

Mentioning that Jacqueline Wong has been finding a suitor for her older sister Scarlett Wong (黃心美), Tracy said, “My two younger sisters would always tell me that since I work in the entertainment industry, I should know a lot of good-looking guys. They’d tell me to introduce some to them, but it’s all just talk. Even if I do arrange them to meet, it would be hard for them to communicate because they don’t know Chinese.”

Tracy’s fellow MHK contestant, 2012 Miss Hong Kong winner Carat Cheung (張名雅), has been criticized by the paps for looking chubbier than usual. Tracy said, “We ate together recently. I don’t think so. Maybe it’s the angle of the photos. But anyway, it is common for women to look bloated sometimes.” (The reports are claiming that she’s done plastic surgery.) “Not possible. She still looks like what she looked like during Miss Hong Kong.”

On the other side of the interview panel, Fred surprised the reporters when he said he’s not much of a gamer. “In fact, I don’t know even know how to play video games, but I do like this character style,” said Fred, referring to the character of the game they’re promoting.

Telling Fred that Tracy’s sisters wanted her to introduce them to good-looking guys, Fred laughed and said, “I definitely wasn’t considered. I didn’t even know she had sisters!”