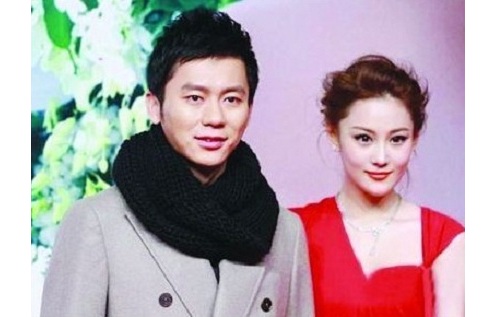 After splitting up with Ron Ng (吳卓羲), Viann Zhang (張馨予) was rumored to have falled for mainland Chinese actor, Li Chen (李晨). Viann was photographed holding Li Chen’s arms, drinking late together and even returning to her apartment together. The pair are currently filming mainland drama, Naked Wedding < 裸愛>, together.  Initially, Viann denied dating Li Chen and claimed that they were only friends. Yesterday evening, Li Chen finally broke the silence and subtly admitted his romance with Viann on Weibo.

Li Chen wrote on his Weibo, “In our life, we often have to make many decisions; our ambitions, our jobs, what to eat for lunch, what to dress, what kind of life to lead, and who to spend our life with. When making choices, some people will hesitate and take a step back, and some people will firmly stick to their choice.”

Was Li Chen hinting at Ron Ng’s hesitation to open up his relationship with Viann? It was rumored that Viann was upset with Ron for refusing to acknowledge their romance. Although Ron officially declared Viann’s status in mid-July, Viann had already decided to end their romance.

“A strong person never thought of escaping, although sometimes the results are not expected. When faced with explanation, cover up, and suspicious news, a strong person will choose, and not explain.”

Li Chen’s cryptic message aroused interest in its hidden meaning. Was Li Chen referring to Viann’s determination to break off with Ron after learning about his cover up for infidelity?  Did Li Chen also refer to Viann for not explaining her breakup with Ron? Viann had announced the breakup with Ron through her manager. She also did not come forth and clear speculations about dumping Ron for Li Chen.

Li Chen lamented that celebrities could not have their privacy; even their love lives have to be accounted to the public. He wrote, “Besides celebrities, who else need to account to public when they are dating? Even if we can’t endure, we have to. There is no gaining sympathy, and we can’t even complain. When we face ourselves, we can only say to work hard and lead a peaceful life.”

Li Chen also described his romance similar to “Bai Niangzi” and “Xu Xian” in The Legend of the White Snake <白蛇傳>. “What has it got to do with ‘Fa Hai’ when ‘Xu Xian’ and ‘Bai Niangzi’ fall in love? I do not even understand now that I have grown up! Why are there so many ‘Xu Xians’ in the world? ”

Viann wrote on her Weibo, “I found out about the truth today! I want to cry, but there are no tears! Why did you have to treat me like that? Thinking back, I really did let it all go. That girl who ran to the tattoo shop to get a tattoo of your name? She’s dead! As for me, I will rise from the ashes because I met the right one. Thank you, ‘good person.’ After I wash away the tattoo, I will start my life over again.”

Was Viann referring to Li Chen as Mr. Right? From her message, she appeared ready to start a new relationship.

Li Chen also ended his Weibo message with a poetic love declaration, likely dedicated to Viann, “Finally, under heaven and earth, I will be your beautiful landscape, and please give me a shelter in your place.”