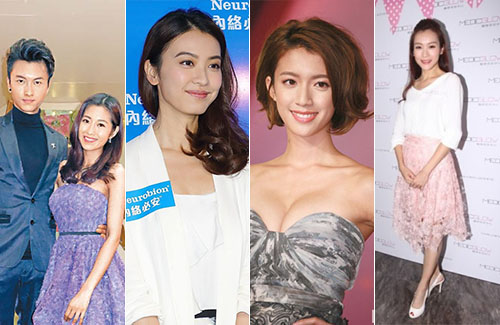 Vincent Wong (王浩信) is going through a big leap in his career. With huge successes like last year’s Over Run Over <EU超時任務> and this year’s Legal Mavericks <踩過界>, Vincent is a hot commodity in the endorsement world, becoming one of the most popularity celebrities that brands like to use. According to reports, Vincent earned seven figures from endorsements alone in the last three months.

But everything comes with a price. It definitely is no surprise to see that Vincent has become the target of love rumors, especially with close costars like Tracy Chu (朱千雪), Ali Lee (李佳芯), and Sisley Choi (蔡思貝). Vincent’s friendship with his costars has reportedly put a rift in his marriage with Yoyo Chen (陳自瑤), who he has one daughter with.

Vincent put the rumors to stop yesterday, telling reporters, “Yoyo and I are fine! Please don’t worry about us!” Yoyo, on the other hand, couldn’t be reached for comment.

Though Ali is good friends with Vincent, she clarified that she has never eaten meals with him alone. She said, “[The cast would] all book a room together to eat hotpot. We’ve eaten together in the studios, and also with our manager.” (Do you think that female costar was Sisley Choi?) “I have no idea.” (Has Vincent’s marriage come up in conversations?) “No.”

Tracy said, “I don’t know what’s going on, but Vincent and Yoyo aren’t kids anymore. They’re mature adults, and they’ll know what to do. Let’s stop with the speculations, and let them answer for themselves.” (Do you feel like you’re being dragged into this?) “Of course not. Whenever we see each other it’s with a bunch of people. Maybe these rumors are coming now because our drama is airing. I hope these rumors won’t affect everyone.”

Sisley also denied being that female costar, saying, “We did all go to hotpot together, but that was for drama promotions.” (Have you heard about their marital problems?) “I don’t want to discuss about others’ relationships.”

Vincent and Yoyo tied the knot on November 11, 2011. Their daughter was born in April 2012. Vincent wasn’t rumor-free after their marriage; over the years, Vincent have been linked with Fala Chen (陳法拉) and Jacqueline Wong (黃心穎).