Wang Leehom and His Daughter Have a Pool Party 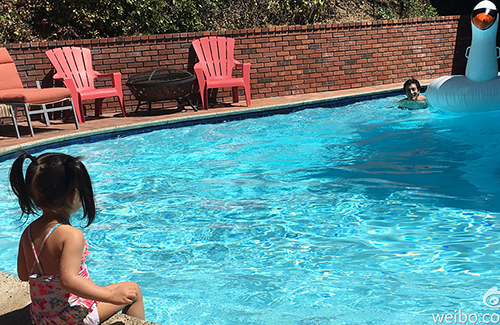 When Taiwanese-American singer Wang Leehom (王力宏) and his wife Lee Jinglei (李靚蕾) welcomed their daughter Jiali in 2014, many of his fans joked that Leehom has already entered a life of retirement.

And Leehom doesn’t disagree. To protect the privacy of his family, the 40-year-old actor has gone into half-retirement. He’s becoming increasingly selective on his projects, releasing music only once every few years.

On Wednesday, Leehom went on social media to share a few pictures of his daughter Jiali at his home’s swimming pool. Leehom was careful to not share any pictures that showed Jiali’s face. Jiali, born in July 2014, is now two years old.

“Wrote a story about a little girl, her father, and a white swan this afternoon,” wrote Leehom on Sina Weibo.

Leehom shared three photos from their mini pool party. One of them was a picture of Leehom holding up Jiali while she was in the water. Perhaps this was also Jiali’s first swimming experience?