It’s a common occurrence for celebrities to endorse and wear the same outfits as others, but there are also celebrities where one must avoid clashing with, because comparisons are bound to arise. Yang Mi (杨幂) once famously said that she’s not afraid of clashing outfits with other actresses, as “the ugly one will be the embarrassed one.”

As one of the top trendsetters in Chinese entertainment, the public is in constant watch for Yang Mi’s every move, including the outfits she wears. Here are 12 celebrities who have clashed outfits with Yang Mi—who wore it better? 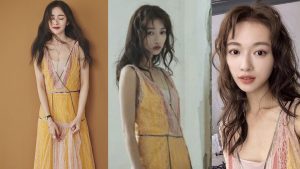 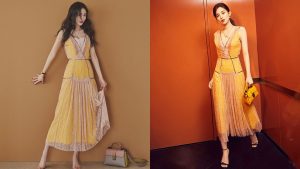 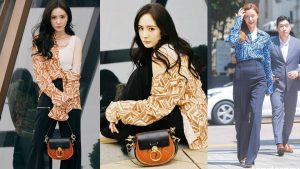 Wearing the same patterned shirt by Chloe but with different colors, both stars gave out different vibes. Yang Mi looked youthful and rebellious, while the Korean actress looked more sophisticated. 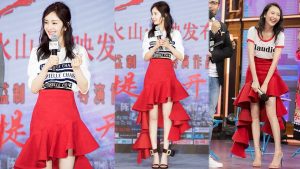 Both actresses are known for their long skinny legs, and this scarlet red skirt by Jacquemus definitely showcased all the assets. The skirt doesn’t do much to complement Yang Mi’s figure, however, so Angel Wang (王鸥) definitely wins this round. 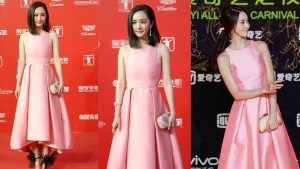 Both Yang Mi and the Girls’ Generation star are known for their lean and skinny figures, so seeing them wearing similar outfits isn’t that completely farfetched. The dress’s top cut definitely compliments Yoona’s shoulders better. 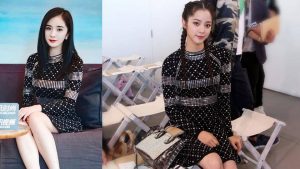 Nana Ou-yang (歐陽娜娜) is another rising star to watch, and another popular overseas idol who has successfully broken into the mainland Chinese market. While both look great in the Michael Kors dress, Nana does look better in it. 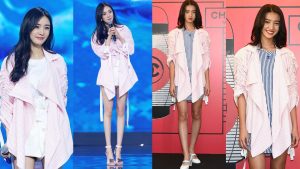 Koki (木村光希), the daughter of 90’s Japanese heartthrob Takuya Kimura (木村拓哉), clashes with Yang Mi in this pink striped outerwear. Both stars have decided to pair it up with a different undershirt, but the clash in patterns for Koki does make the outfit look slightly more confusing to stare at. 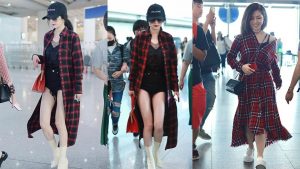 They’re not wearing the same shirt exactly, but the look is similar enough. With Yang Mi’s slimmer legs, Yang Mi definitely wins this round. 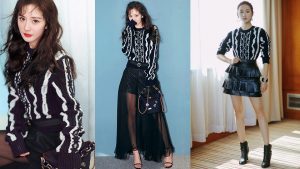 Yang Mi and the Ruyi’s Royal Love in the Palace <如懿传> star Li Chun (李纯) are both wearing the same black feathered sweater above, and while both look absolutely gorgeous in the long sleeve, Yang Mi has the better style. 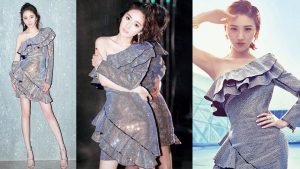 The asymmetric complements both Yang Mi and Jing Tian (景甜) equally. It takes a definite amount of boldness and star quality to pull this look off. 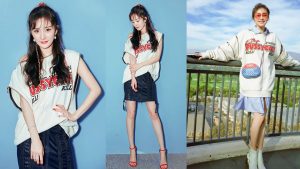 While Yang Mi pairs the Gucci shirt with a leather skirt, Qin Lan (秦岚) pairs it with a longer shirt. Both styles are pleasing to the eyes, but Qin Lan definitely looks cuter in this look. 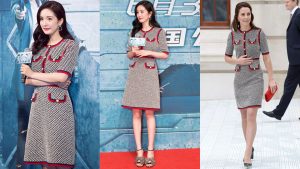 Didn’t expect Yang Mi to ever get compared to the Duchess of Cambridge, but this Gucci suit was what brought the two together. But when it comes to looking like a royal, it’s hard to beat Catherine. 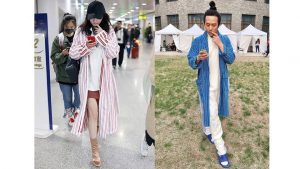 Deng Chao’s (邓超) impeccable style was what made Yang Mi say: “I’m not afraid of clashing outfits with anyone, as the ugly one will be the embarrassed one.”