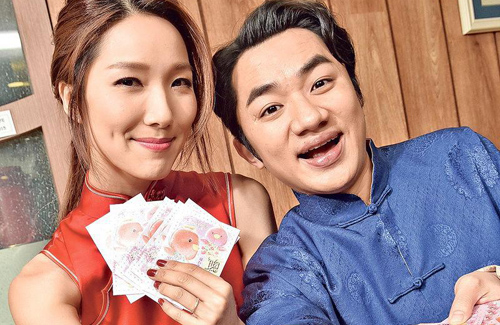 Getting married on Valentine’s Day two years ago, Wong Cho Lam (王祖藍) and Leanne Li‘s (李亞男) anniversary is approaching soon. Since Cho Lam has been splitting his time in Mainland China and Hong Kong due to work, the couple does not have time to start a family yet but hopes to have a baby in two years.

Starting his own production company and signed several artistes last year, Cho Lam has been especially busy. However, for the Lunar New Year holiday, he took time off to visit Leanne’s family in Shanghai. The couple also traveled to Japan for both their families. After completing their family celebrations, Cho Lam and Leanne will be spending Valentine’s Day and two-year wedding anniversary in the United States.

When asked to share tips on how they got a long as a married couple, Cho Lam simply responded, “Taking care of my in-laws. If the family is happy, she’s happy. If she’s happy, I’m happy! Families getting along with each other is very important in a marriage. I’ve been busy but she doesn’t put a lot of pressure on me – there’s always laughter. Tons of crying and laughing. For every wedding anniversary, we make sure we are not busy. If my company gets on track this year, then I won’t have to worry about it and I’ll have more free time. I can finally sleep and have better health. She’ll be happy and that’s my New Year resolution.”

Although Leanne was the first out of her Amazing Esther’s friend group to get married, it was Linda Chung (鍾嘉欣) who gave birth first. Leanne shared, “I’m not in a rush, but everyone keeps saying I should have a baby before 35 years old and avoid a high-risk pregnancy. We’ll see if it can happen before I’m 35!” Leanne added, “I also have to prepare myself and get my body ready. I’ll ask Linda for some tips. Then I’ll try – I still won’t hurry, but I’ll just be ready. Let’s get past this year first! I have a project where I have to write, direct, and act – I have to finish that before I’m ready to have a baby. Like Lee Ka Shing (李嘉誠) once said, ‘If the company can run smoothly without me, then I can be worry free.’ The earliest would be two years from now, and I want to enjoy another year [with only Cho Lam].”

Not In Competition With TVB

It may have been difficult in the first year of opening his own management company, but Cho Lam revealed that many artistes were already looking for opportunities to work with him. Unfortunately due to the current size of the company, Cho Lam had to turn down many talented artistes.

Cho Lam explained, “We said no to many artistes because of we can’t manage to take on more. I don’t want demand to exceed supply. With the current state of the business, I’m afraid of not being able to organize enough jobs for each artiste. We’re a small company and it’s more family style; it’s not about signing on only popular artistes. The most important factors are to see if they have good hearts, if we can work well together, and if they’re willing to work hard.”

Although many artistes who have signed with his company are previous artistes from TVB, Cho Lam expressed there is no direct competition. Since his company is also financed by Shaw Brothers, Cho Lam explained that it is a sister brand of TVB, so artistes are able to continue to film for both companies.